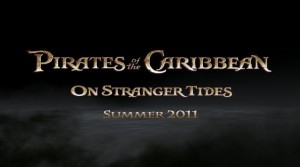 The fourth ‘Pirates’ film, titled “Pirates of the Caribbean: On Stranger Tides,” will soon begin shooing in Hawaii. The film will star Johnny Depp, reprising his role as Captain Jack Sparrow, and Geoffrey Rush as Barbossa. The film will be shot mostly in Hawaii, given the incentive of strong tax credits similar to those of Missouri’s when “Up in the Air” was being filmed.

There will however be two main characters that we will not see returning to the fourth installment. Both Orlando Bloom and Kiera Knightly have both said that they do not plan on returning. The first thought that comes to the heads of many is that they want a bigger cut of the action. With the tremendous success of the franchise thus far, Bloom and Knightly most certainly would need a bigger paycheck to appear in the fourth film. With the economy the way it is, and obvious cost-cutting measures already being observed, it looks like that just isn’t an option for the studios.

In an interview with Kiera Knightley while she was promoting “Atonement” in late 2007, the actress said, “I can’t imagine doing another one. That was an amazing experience, really was, totally extraordinary, but I think three for me is probably enough.”

But Bloom and Knightley aren’t the only ‘Pirates’ alums that won’t be making it to the fourth installment. Director Gore Verbinski, who directed all of the films thus far, will be replaced by Rob Marshall for the next film. Verbinski has understandably decided to move on with his career and pursue some new projects – one of which will be the big-screen adaptation of the popular videogame “Bioshock.”

Marshall, who has directed films like “Chicago,” “Memoirs of a Geisha,” and “Nine” seems very excited and optimistic about the opportunity to direct the film. In an interview with comingsoon.net, Marshall said “I was so surprised they called me. It was Johnny Depp and Jerry Bruckheimer. Jerry called me, but Johnny was interested in working with me. It’s a wonderful thing when something like that happens, so we sat and met and he could not have been more lovely. He’s the nicest man. I’ve been very lucky to work with some great people and he’s one of them. So I could tell that we could maybe do this, and then they offered it to me.”

The story for the upcoming ‘Pirates’ film is based on the 1987 book “On Stranger Tides” written by Tim Powers. It mainly revolves around the search for the Fountain of Youth – which runs right into where the ‘Pirates’ writers wanted to take the story next. The film is set for release in summer of 2011.

What do you think the “Pirates of the Caribbean” franchise will be like without Verbinski, Bloom or Knight? Will it make a difference? Or will Johnny Depp as Captain Jack Sparrow be enough to keep the series afloat?