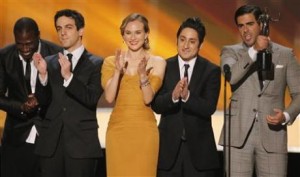 The film, which appeared on many critics’ top ten lists for 2009 (including my own), has been given much acclaim since it’s release in late summer of last year. Christoph Waltz, who gives an amazing performance as Colonel Hans Landa in the film, has already garnered several awards for the role. Waltz won the SAG award for best supporting actor last night, which he can add to his Golden Globe win last week. At this point, there is no doubt in my mind that he will take home the Oscar.

Last year the award for Outstanding Performance by a Cast in a Motion Picture went to “Slumdog Millionaire,” which went on to win the Academy Award for Best Picture of 2008.  Will “Inglorious Basterds” follow in it’s footsteps?  Or will James Cameron’s Mega Blockbuster “Avatar” take the prize?  I can honestly say that “Avatar” was an incredible movie – showcasing the best CG animation ever seen on the silver screen.  But best picture of the year is a bit of a stretch.  I think that there is a big difference between an amazing technical achievement and an amazing film.

The following cast who received the award includes: 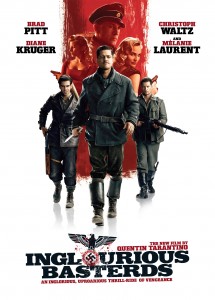 Who do you think will win the Oscar for the Best Motion Picture of 2009?  Sign up now and discuss on myReviewSTL!