JJ Abrams Talks About The Status Of STAR TREK Sequel 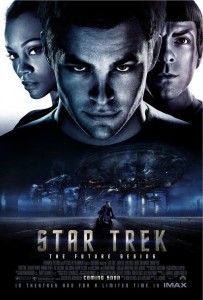 I am not a Trekkie by any means.  I have never watched any of the tv shows.  I have seen a couple of the movies, but never got into them.  I just felt like I was missing something the whole time.  That changed drastically in 2009 when I saw JJ Abrams’ reboot STAR TREK.  It was a sci-fi adventure that I immediately wanted to see more of.  I wasn’t the only one either.  Critics and audiences wanted a sequel, and the studio looked like it was going to move forward quickly.  But almost everyone involved decided to move on to other projects first.

Now, Abrams has finished his homage to Spielberg and ’80’s sci-fi films with SUPER 8, and he is ready to move on to his next project.  Will it be the STAR TREK sequel?  Take a look here at what Abrams has to say.

“The next thing we’re working on, and hopefully we’ll be able to pass information out sooner or later, is the next Star Trek.”

The studio already set a release date on the film for June 29, 2012.  Is there anyway this could become a reality?

“I care much more that it be good than it be ready. I’m, obviously doing everything I can to make sure that schedules don’t get screwed up. But I don’t think anyone wants a movie on time that’s not worth your time.  We want to make sure it’s done right. The guys I’ve been working with are obviously brilliant so I’m really excited to get back into it. So this is something I’ve been working on pretty closely, so in part they’re like, fine we’ll meet you to discuss.”

Will Abrams be jumping on the bandwagon with the 3D craze and filming STAR TREK 2 in 3D or worse, post-conversion?

“I’m not yet considering it, but you know, I haven’t gotten any phone call from people in suits. I know what’s good for me.”

What do you think about all of this?  Do you want STAR TREK 2 or would you rather see Abrams create something completely new?