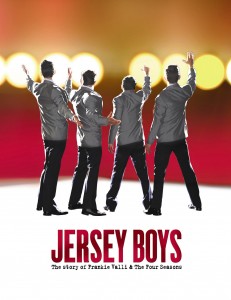 Kevin: I read that you have been acting since you were 12.  Is it something you immediately fell in love with, or did you ever have plans to do anything else?

John: Yes! My first show was Meredith Wilson’s “The Music Man” with my grandmother Francesca Petisca’s Community theatre “The Little theatre of fall River in MA.  They are still an amazing community theatre churning out fantastic productions. I always knew I would be performing on some level. I did fall in love with the theatre right away. I love the joy that performing brings me and the potential live performance has to affect people.

K: How does it feel to be a part of “Jersey Boys,” a show that has been so popular since it opened on Broadway and received the Tony for best musical in 2006? 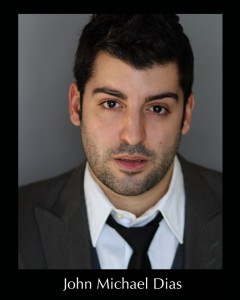 J: It’s incredible. Speaking of affecting people… I have never been part of a show that consistently get’s this dramatic of a positive reaction from every audience. There’s nothing NOT to like!

K: How did you get involved with “Jersey Boys” originally?

J: I auditioned 13 times over a period of 2 years. In 2004 Ron Melrose our music Director and arranger was playing audition piano for the show “We Will Rock You” They had no interest in me but Ron thought there was something there that might be good in Jersey Boys, So he stole my headshot/resume from the trash and I got a call for my first audition a few months later.

K: You were a part of the first national tour, right?  How much has the show changed and evolved since you started?

J: I was originally cast in the Chicago Company that started out with a 6 month sit down in SanFrancisco.  We then stayed open in Chicago for 2 and a half years. Once that company closed, a position opened up for me out on the road in this touring company. The creative team tries their best to maintain the show and keep it as close to the original Broadway company’s splendor.

K: Tell me a little bit about Frankie Valli in the show. 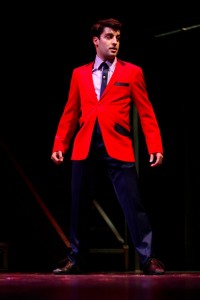 J: The show is about his story and the three other seasons Tommy Devito, Nick Massi, and Bob Gaudio and their rise to fame. It’s sort of a 2 1/2 hour Mtv behind the music  episode. The show takes you from their early days all the way through present time. You get to see Frankie grow up, become a man and the icon he is today.

K: You have been in a lot of different roles. Would you say that this one is more challenging than others, and how does it compare?

J: Nothing compares to this role. It’s been my most challenging and most rewarding part I have played thus far in my career and unless someone is writing a part for me right now that is harder… it might be the toughest role I will ever play. Frankie sings 27 hit songs and almost never leaves the stage for the entire show unless it’s to change costumes.  It’s quite a ride.

K: What is your favorite part of being involved in “Jersey Boys?”

J: I think I would have to say borrowing Frankie Valli’s star and affecting people are my favorite. The guys who play these real people every night can only imagine what it’s like to really be these men and accomplish what they have in their lives. As long as I keep that in mind and the audience that is celebrating this music and this extraordinary story, the audience reaction will always be my favorite thing.

K: Have you ever been to St. Louis before?  Played the Fabulous Fox Theatre?

J: No I haven’t! We had our sound check today in that Fabulous space and I am so excited to perform there! It is without a doubt one of the most fantastic theaters I have ever seen. I am so excited to explore this beautiful city and enjoy the weather!

K: From your website, I saw that you have painted quite a bit. Is that something else that you do professionally, or is it a hobby?  (I like the style, very cool) 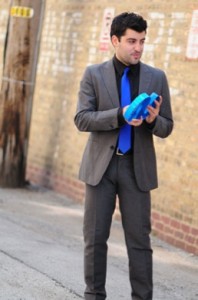 J: Yes, thanks! I have taken to traveling with my paints to give me something to do in my off time. I mainly do portraits and really loud abstract stuff. It’s definitely a hobby but I have been paid to do a few pieces for different people.

K: What do you like to do in your free time beside from acting, painting?

J: My grandmother who introduced me to theatre also introduced me to costume design and sewing, so I tend to make a lot of friend’s Halloween costumes as well as alter their clothes like hemming  jeans and whatnot…. exciting huh?

K: How long does the tour for “Jersey Boys” go, and what happens when it is over?  Do you have any other projects in the works?

J: As long as the people want to watch this show we will be touring. I am working on my CD right now just to keep myself going and my creative juices flowing. I should be releasing a few tracks soon on my website Johnmichaeldias.com.