Steve Kelley Reviews “Inception” – The Smartest Movie of the Summer 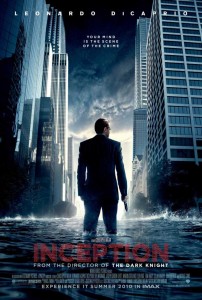 Thanks to Inception, the latest Christopher Nolan film, these are no longer words I only use when I look down in the shower. Chris (I feel like we’re on a first-name basis based on the zero times I’ve met him) is best known for helming the reboot of the Batman franchise, but this might be his magnum opus.

As I settled into our seats with my lovely friend Sarah, who was kind enough to cook a ridiculously good dinner beforehand, I thought it’d just be another summer action flick. Fortunately, I was very, very wrong.

The film revolves around Dom Cobb (Leonardo DiCaprio) and his team of extractors. Aside from being the only time I get lucky with the ladies, dreams are when our minds’ defenses are at the lowest, so Dom and his team are paid to enter a person’s dream and steal their secrets. After failing to extract secrets from a man named Saito (Ken Watanabe), Saito turns the tables and offers Dom a much harder job called inception: planting an idea into the mind of a business rival, Robert Fisher, Jr. (Cillian Murphy).

Apparently the energy company Fisher’s family owns is poised to control half the world’s energy supply, creating a ginormous shift in power and thus driving Saito’s company out of business. Saito wants Dom to plant the idea that Fisher needs to break up the company. In exchange, Saito gives Dom the chance to return to his children, whom he’s unable to see (for reasons that are explained later).

Dom has a full team of people to help him in the process. Arthur (Joseph Gordon-Levitt) is his right-hand man and does the research on the target, allowing the dream to be more vivid. Ariadne (Ellen Page) is the architect who actually constructs the dream world. Eames (Tom Hardy) impersonates people in the target’s life and helps break down the mental defenses. Yusuf (Dileep Rao) is responsible for coming up with sedatives for the dream. Saito comes along as well to make sure the job is done.

As the movie progresses and follows their attempt to break down Fisher’s mental barriers, layering dreams into dreams, Dom’s past is explored. Unable to let go of the memory of his wife (Marion Cotillard) after her death, she roams his subconscious and her presence often interrupts his work in the dream world to the point that she begins detracting his performance.

Typically, I’ll pick apart a movie and break down what I liked and didn’t like about a film. But in this case, I can find very few faults with the movie. There are a lot of complex layers, but Nolan’s written a script that takes the viewer step by step through the process. Issues of guilt and forgiveness are explored, as well as the disorientation and cognitive dissonance that a person experiences in the dream world.

The performances by the actors are commendable as well. DiCaprio, no longer the little punk who scarred men everywhere who were dragged to see Titanic, does a terrific job of a man haunted by his past who just wants to get home to see his children. Page and Gordon-Levitt both turn in terrific supporting performances as well. The special effects are incredible as well, making the surreal seem plausible. The hallway fight scene in particular was well-crafted, invoking shades of The Matrix. The film is a bit lengthy, clocking in at 148 minutes, but it never really loses the pace or seems like it’s dragging on.

As we left the theater, neither Sarah or I really said anything, other than her occasionally telling me, “Don’t touch me.” The entire film is a thought process. Even the final scene does its best to mess with your mind, but not in a bad way. Christopher Nolan is a full-blown superstar in the directing world, and Inception is easily the best film I’ve seen this year. I cannot recommend this movie highly enough. Pretty much the only way this movie could get any better is if Batman fought a megalodon while Katy Mixon refereed.

Hmm…if you’ll excuse me, I have to go start writing a script.

Inception gets an A.