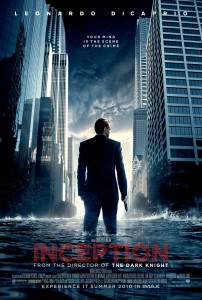 Don’t read this review. Seriously. Don’t. Christopher Nolan’s latest film is such a twisty-turny fantastical film that, if you have any desire to see the film, you’d probably be best served walking in cold. And honestly, it’s good enough to warrant that you stop reading right now in order to keep your slate clean. However, if you can’t resist…here we go. Leonardo DiCaprio plays Cobb, a mastermind of corporate espionage who specializes in crashing into people’s dreams in order to steal information. The procedure is called “extraction.” However, there is another (almost mythical) procedure that Saito (Ken Watanabe), a ridiculously wealthy business tycoon, wants Cobb and his team to attempt: Inception – the process of planting a thought rather than stealing one. Each person on Cobb’s team has a specific role to play. Ariadne (Ellen Page), an architecture student, is the newest member of the team and as such, she is the audience’s entry point to this world. It is her job to reshape the surroundings in which dreams take place, hence an architecture student.

As a preamble, and in the interest of full disclosure, allow me to state that there is nothing I find more irritating than stories about dreams. Whether its Dallas wiping out an entire season (and royally screwing their sister-show Knots Landing in the process) or whatever the hell The Devil’s Advocate was trying to do, dreams are almost always an indolent author’s escape hatch; literary white-out that enables the writer to gloss over plot holes or completely reboot the narrative. I know it’s one of the most beloved films of all time but even The Wizard of Oz is a bit of a cop out. But in 1939 at least it was a new cop out. (On a side note, Neil Gaiman’s Sandman is completely exempt from this discussion. It’s sheer unadulterated brilliance.) Compounding the problem on a personal level is that, since I rarely remember my own dreams, the concept of dreaming holds no fascination for me. However, Nolan (who also wrote the screenplay) skillfully avoids all this. His dream world has rules and he plays by them.

The worlds he creates are visually stunning. Worlds crumble and fall and rise again in a matter of moments. Street scenes fold in on themselves with us still inside. Time flows in multiple directions. It’s an exhilaratingly surreal experience. But it’s more than just a head-trip. It’s also a first rate action flick. As Cobb and crew invade the thoughts of their unsuspecting targets, their minds fight back by concocting crowds of combatants to fend off the onslaught. It’s these scenes where Nolan really takes things up a notch. The action plays out across M.C. Escher-esque backdrops with sequences that have as much in common with Fred Astaire’s Royal Wedding as they do with any more traditional action movies.

The film will most likely be compared to The Matrix, what with its amazing effects and reality bending plot points. But where The Matrix had an air of pretension about its supposed profundity, Inception manages to avoid the Wachowskis’ sense of self-congratulatory smugness. Nolan doesn’t seem to fancy himself a prophet in the way that they did. While they both played with concept of reality versus perception, Nolan leads us to ask questions instead of implying answers.

The film skillfully navigates an increasingly intricate narrative as our heroes, in an effort to outrun Cobb’s mysterious past, delve deep into dreams within dreams within dreams. In lesser hands, the picture would become an incomprehensibly muddled mess. The special effects are stunning but always manage to serve the story instead of the other way around. Unlike most modern movies, Nolan smartly relies on real people performing real stunts opting to paint with a CGI brush instead of a roller. It stacks layer on top of layer, both visually and thematically, yet never gets lost inside of its own maze. The story is a tricky one but rewards the attention you grant it. It’s difficult to tell on a single viewing if all of its complexities withstand scrutiny in the light of day. But at first blush they appear to, and it was certainly a fun ride getting there. Nolan has provided a rare treat – a smart, sophisticated action movie that rewards multiple viewings. I went into this screening with a bit of a headache and, truth be told, this movie made it worse. Oddly enough, that’s intended to be high praise.