A Dream of A Movie 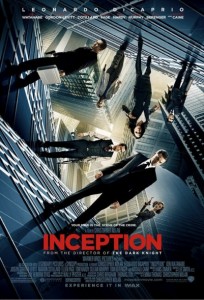 Christopher Nolan has created a Dream world, with visuals that are stunning, minding blowing action sequences that are close to those you would have seen in “The Matrix”, and a story that will take you away from your life and bring you into a Dream World. In Nolan’s Movie there is a lot to see, but there is also a lot to think about.

On the simplest level, it’s a caper flick, about a thief Cobb (Leonardo Dicaprio) trying to pull off one last score before leaving the business for good. The difference in this caper film Cobb, and his partner Arther (Joseph Gordon-Levitt) are thieves that make a living stealing secrets from the subconscious. They sedate their prey, use their silver briefcase filled with a special machine that connects people minds.

The story begins with a tryout, the duo are trying to get information from the mind of Saito (Ken Watanabe), a rich businessman. They fail, but Saito is impressed enough to offer them a special job: not to extract information, but to implant an idea into the dreams of a competitor (Cillian Murphy), a complicated process known as inception. Inception is thought to be impossible. Cobb knows, from experience, that it can be done, he also knows the cost. If he can complete this job it’ll mean being cleared of a crime he was set up for, and seeing his beloved children, from whom he has been separated.
To do this almost impossible job Cobb must assemble a team. The team consists of – Yusuf (Dileep Rao), a chemist who will take care of putting everyone into a dream state; Eames (Tom Hard) a “forger,” who can impersonate people in dreams; and Ariadne (Ellen Page), an architecture student brought in to help construct the dreamscapes in which the inception will take place. Why does Cobb need an architect? Can’t he build his own dreams? Well he can. But he won’t, the reason why is a part of the story best discovered for yourself. Cobb’s wife Mal (Marion Cotillard), plays a huge part in his life and again it is something you will have to learn about yourself.

Nolan plays with a lot of things in this movie; of course, Perception and reality, but also time. In real life a second is a second, but in a dream a second is around 10 minutes, but when you go in a dream with in a dream a second will be 1 hour, and so on. Nolan layers dream upon dream upon dream, and we get a story upon a story upon a story. This creates a puzzle for the us to figure out, not to worry it is way more fun than it sounds.

While an architect like Ariadine can construct specific elements, there are always wild cards to be delt with, “projections” which a bits and pieces of your subconscious that take shape in your dreams. Sometimes these “projections” are amusing, but if the person has been trained to protect their subconscious they can be deadly. The effects used to make the dream worlds are of course computer generated, but it is done so well you can’t tell.

A movie like “Inception” are usually suspect. Can and will it live up to the hype? I have to say yes it lives up to the hype and then some. The effects are so crucial to the story and done so well, Nolan brings us into his world. I really felt like I was dreaming. This is a movie that you have not seen before, it is so creative and ambitious you leave wondering if and when you will see something like it again.

Buckeye Brad gives “Inception” an A+, such a great story, directed so well, I don’t think I will see a movie the rest of the year that will take me out of everyday life and into a story done as well as this. Go see it you will enjoy it, don’t think too hard or you will miss some of it’s wonder and charm.