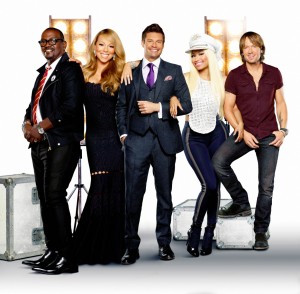 I am embarrassed to admit it, but I am one of the millions of Americans who tune in every week to Fox to watch American Idol. While last season was filled with high hopes, it was ultimately a letdown, due to a lack of talent and lack of chemistry among the judges. In fact, most of my memories of last season’s Idol revolve around the creepy actions of judge Steven Tyler. I remember often commenting that Tyler came off as a dirty old man, constantly checking out and hugging on much younger female contestants. For a show that is all about singing and music, that is not how one should remember it. Last season’s judges were soft. They were never scathing, like Simon Cowell once was. Gone were the heartless jabs at a contestant’s lack of talent, replaced by the constant happy-go-lucky, feel good critiques by Steven Tyler and Jennifer Lopez. After a ratings drop, things had to change and that led to Nikki Minaj, Mariah Carey and Keith Urban coming aboard the Idol mother ship.

To say I was skeptical of the new judges’ panel was an understatement. At first, I threatened to not watch the show due to my dislike of Minaj and Carey. I actually felt Keith Urban would be a good fit for the panel. He has a very friendly and warm demeanor about him. I could not stand any of Minaj’s music, much less listening or looking at her. With Carey, I just felt like she was a diva and would carry herself like a diva, which turns out may make for great television. The tension between Carey and Minaj is so strong it’s been visible at times on television. This is nothing new though, as their spats were well publicized in the tabloids. Regardless, it makes for great television. The fact that Urban is stuck in between them makes it even better. He is the cool, calm and collected judge. I haven’t even mentioned Randy Jackson yet, and the reason is he brings nothing new to the table. It’s not that he is hurting the show, but he isn’t really helping it either. It just seems like he’s just really kind of there to take up space.

In what could be a pivotal season for the continuation of the show, it was clear Idol was missing something, brutal honesty. Simon Cowell has been gone for a few seasons now, and it’s clear that brutal honesty left with him. My one major complaint of the show has been that the judges are too nice. To my delight, Minaj has changed that. She is the female Cowell of this seasons show. She will tell a contestant exactly what she thinks of them. She will spew F-bombs with the best of them. While I am not a fan of her music, I love her personality. The producers of the show must have known what they were doing when they signed her up to judge the show.

With a group of judges that, so far, seem to click, this could be a wonderful season for American Idol. There have already been a number of colorful and interesting contestants from Papa Peaches, a gay male contestant, who had an ego the size of New York to St. Louisan Curtis Finch Jr., who also has an ego. Unfortunately, his attitude may get him booted before he has a chance to reach the top 12. It is clear that this season will be different than the last few. There will not be a pop-rock, guitar playing winner this season. So far, auditions have been dominated by R&B singers and soulful female crooners. No matter who wins, with the shuffling of the judges’ panel and some colorful contestants, American Idol is sure to be a wild ride this season.