Franchises We Once Loved, In Honor of ‘A Good Day to Die Hard’ 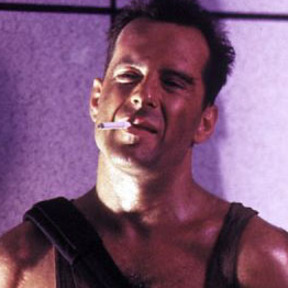 With A Good Day to Die Hard still in theaters and quite the disappointment, I thought it would be a good time to take a look at other film franchises. Franchises that we once loved but eventually ended up cringing at or openly mocking. So the list for the week is – Film Franchises That Should Have Quit While They Were Ahead.

Inspector Clouseau is the Fonzie of filmdom. The original movie centered on David Niven’s character which made sense seeing as how he was a jewel thief and the “Pink Panther” is a diamond and all. However, Sellers stole the show to such a degree that a sequel featuring him was begun almost as soon as production wrapped. A Shot in the Dark was released mere months after The Pink Panther.

The franchise remained popular throughout the ‘70s until the untimely death of Peter Sellers in 1980. Unfortunately that didn’t prevent director Blake Edwards from rummaging around on the cutting room floor in order to construct Trail of the Pink Panther. The film contained not one original scene from Sellers as he had died 18-months before production even began. And, if that’s not ghoulish enough, David Niven (reprising his role from the original) was so weak from Lou Gehrig’s Disease that celebrity impersonator Rich Little had to be brought in to rerecord his dialog in post-production. That’s right; they couldn’t even wait for people to die before the robbed their graves. The film was deemed so bad that Lynne Fredrick (Seller’s widow) won a $1.475 million lawsuit against the makers of the film for “insulting her husband’s memory”.

And while the film contained the following dedication – “To Peter . . . the one and only Inspector Clouseau.” – they filmed the sequel (Curse of the Pink Panther) simultaneously. Yet even that wasn’t enough to discourage them from coming back a decade later with Son of the Pink Panther starring a then relatively unknown Roberto Benigni.

And don’t even get me started on the Steve Martin version.

Most film nerds know that The Magnificent Seven is a remake of Akira Kurosawa’s Seven Samurai. The plot is deceptively simple – an oppressed Mexican town hires seven gunfighters to defend their village. But each character has his own unique reaction to the notion of defending this town. The film was something of a box office disappointment at the time but has since grown in stature and is now the second most shown film in U.S. television history (behind The Wizard of Oz.) So let’s explore how the beat this franchise into the ground, shall we?

The first sequel came six years later and was called Return of the Seven. Although, since Yul Brenner was the only returning cast member, perhaps they should have called it Return of a Seven since clearly they couldn’t get thee seven.

Three years later even Brenner wouldn’t come back so instead we got…George Kennedy. Yeah, really. This time out it was called Guns of the Magnificent Seven. Presumably because the guns were the only returning cast members from the original film. But that’s just a theory.

Oh, but they weren’t done. By 1972 even George Kennedy wouldn’t return. Yup, the man who would star in all four Airport films was too good for this.

I’ll give you a moment for that to sink in.

He was replaced by Lee Van Cleef in The Magnificent Seven Ride! That was their exclamation point, by the way, not mine. By this point they were having so much trouble rounding up the requisite number that one of the seven was actually played by a Muppet.

Ok, that’s not true. But only because they didn’t think of it. And it would have been awesome.

Smokey and the Bandit

Any redneck worth his weight in Skoal knows that they’re thirsty in Atlanta but there’s beer in Texarkana. And while Smokey and the Bandit wasn’t high-art, it sure was fun. The film was a surprise hit and became the 4th highest grossing film of 1977. So clearly a sequel was in order.

Smokey and the Bandit II (or Smokey & The Bandit Ride Again depending on where you saw it) involves all the major players from the original. And while its predecessor ended with them agreeing to go to Boston and back for clam chowder in 18-hours the sequel doesn’t show us that run. Instead they are tasked with transporting an elephant to the Republican National Convention. Though the film was not as successful (nor as good) as part one it was not without it’s charms and did manage to become the 8th highest grossing film of 1980.

Smokey and the Bandit Part 3 was the 95th highest grossing film of 1983. Leaving one to assume that only 94 films were produced that year. So what went wrong? First off there was no Burt Reynolds (save a brief cameo at the end clearly added after production had ended) nor Sally Field. But the biggest problem was the movie that they tried to make. The film was originally to be called Smokey IS the Bandit. And that means exactly what you’re afraid it does…Jackie Gleason would take over the role of the Bandit and become the pursued instead of the pursuer.

And all indications are that that is precisely the movie they made. But the test screenings went so poorly that they were forced to scrap it, film some additional scenes and hobble together the film that was finally released. For years the existence of Smokey IS the Bandit has bordered the apocryphal until the trailer above surfaced in 2010.

Oh, and then they turned it into a series of made-for-TV movies only the Trans AM was now a Dodge Stealth. When you can’t get the car to sign on for the sequel, you have serious issues.