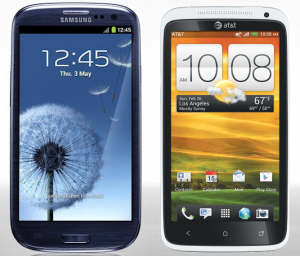 The Samsung Galaxy S III and the HTC One X

The impending sales juggernaut that will be “iPhone 5” is rumored to be coming this Fall with a bigger screen, but a sinking HTC and rising Samsung are looking to finally stretch their noses past the seemingly unbeatable iPhone 4/4S with their latest flagship devices. The last time HTC and Samsung went head-to-head was their previous flagship releases, a battle which Samsung decidedly won.

It all starts with the new 720p displays, taking aim at the iPhone’s now 2-year old Retina Display technology. Just last November Android saw its first 720p screen in the HTC Rezound, marking a first real competitor to the iPhone 4’s 3.5″ 540×960 display. Both the One X and Galaxy S III will be sporting a 720×1280 screen with pixel densities of 306 to 312ppi, compared to the iPhone 4’s 329ppi.

Apple has claimed that if the human eye cannot distinguish individual pixels of a screen, then such technology can be labeled as a Retina Display. For a smartphone held a foot away from the face, they claim any pixel density above 300 pixels per inch (ppi) can be labeled as a Retina Display. The iPad 3 is also being marketed as having a Retina Display even thought the 9.7″ 1536×2048 screen measures only 264ppi. This is due to the iPad being more commonly held at arm’s length (18″ away from the eyes) rather than up close like a phone.

The closer you get to a screen, the more pixels you need to display images clearly. A similar test would be to look at your HDTV from your couch and then right up against the screen. A 40″ 1080p yields a pixel density of just 55 pixels per inch. Up close it looks horrible, but when sitting across the room it looks fine.

We have 4G and dual-cores! What else would you need?! 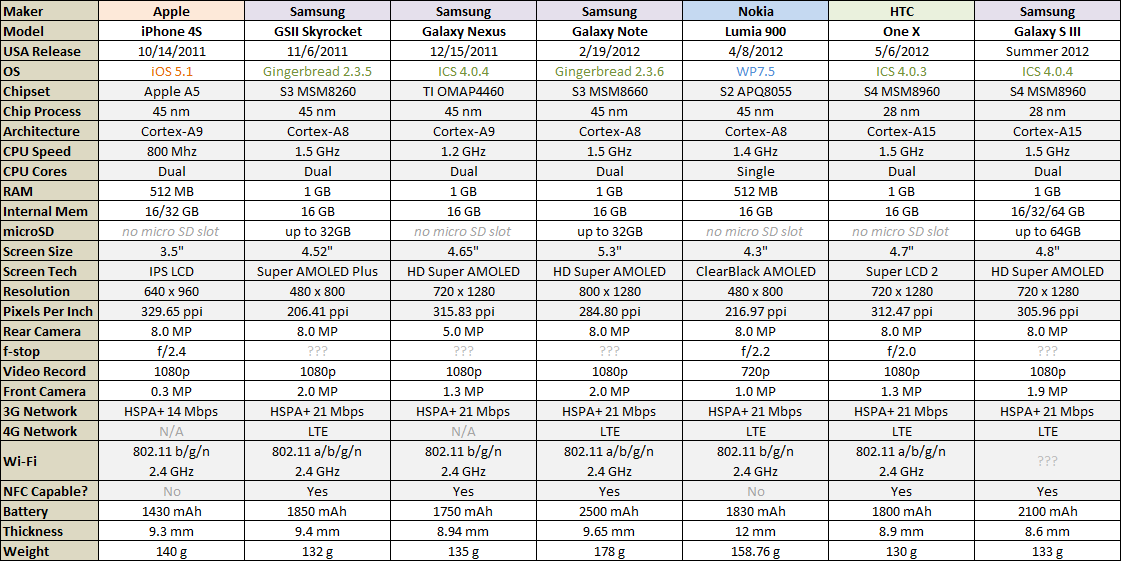 Both the international versions of the HTC One X and the upcoming Galaxy S III feature the next break-through in mobile computing: four cores of processor horsepower! Ever since the dual-core handsets came out I have been truly excited about my next phone. As of May 1st I became eligible to upgrade, and wouldn’t you know it? They bring out QUAD-CORE devices! The new HTC One X has been given NVIDIA’s Tegra 3 quad-core CPU. Samsung have built their own quad-core Exynos CPU for the GSIII. So here we have the next generation in high-end smartphones from two very popular Android OEM’s both sporting beastly quad-core CPUs.

Here’s the rub: the U.S. models of these phones won’t have quad-cores. The 4G frequencies used here in the States are incompatible with the new processors. Instead, both HTC and Samsung are foregoing the new quad-core chips in favor of a combined dual-core+LTE chip from Qualcomm.

No Quads in the U.S.? Dual-cores instead?! Blasphemy!

Both phones will receive the latest Series 4 Snapdragon from Qualcomm to combine the processor and data connection radio into a single chip. This will save on battery life as well as eliminate the need to cram a separate LTE chip into the original designs. The new S4 chip will also bring along with it a smaller chip size than the quad-cores it’s replacing. This will also further reduce power consumption, and the CPU will occupy less space inside the handset. Although it is still just a dual-core, the new A15-based cores are said to offer a 40% performance boost over the A9 cores as found in the Tegra 3 and new Exynos 4XXX.

Tell Me More about ARM Chips!

Qualcomm marches to a different beat. They take the Cortex-A8, A9, and A15 designs from ARM and modify them into a custom SoC, or “system-on-chip”. Their processors rely on the same instruction set as their ARM-based counterparts, so they are pretty much compatible with software written for other ARM chips. Being custom designed, Qualcomm can add features like LTE alongside the CPU onto a single chip.

Taking things a step further, Qualcomm’s latest line of CPUs are now being manufactured using a 28nm process. Smaller size = less power consumption. So not only are these chips 40% faster, but the eat up less battery. This is a big deal when it comes to a mobile device! Samsung’s new quad-core is being manufactured with a 32nm process, better than their previous 40nm chips. NVIDIA’s Tegra 2 and Tegra 3 are 40nm chips. Texas Instruments’ OMAP4’s are built at 45nm, but their upcoming A15-based OMAP5 line will be shrunk to 28nm. As you can see, Qualcomm is way ahead of the CPU game.

I Skipped the Previous Section, Just Tell Me Where I Can Buy These Phones!

Sprint will be getting a custom variant dubbed the EVO 4G LTE for $199 on May 18th. You can pre-order your E4GLTE beginning next Monday May 7th.

The Galaxy S III was unveiled earlier this Wednesday. No pricing or carrier availability was announced for the U.S., but Europe can expect to see them arriving on May 29th. Around that time, Samsung will begin shopping around the U.S. handset on a mini-tour.