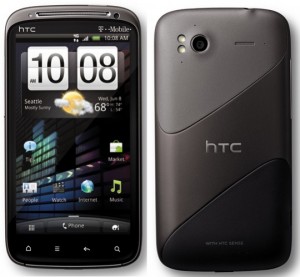 The Unites States is on the verge of receiving quite possibly the two best superphones to ever exist: the HTC Sensation and Samsung’s Galaxy S II. Verizon Wireless just announced today that they would be the first to bring us the GSII, with variants most likely turning up on other carriers much like the previous Galaxy S line. 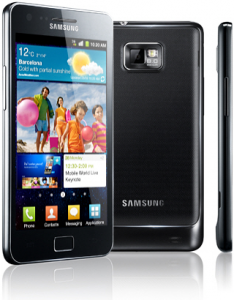 No gimmicky dual-screens or 3D here, folks. We’re talking about dual-core processors running the latest UI’s from each manufacturer. These phones will become each respective OEM’s flagship model upon release, and this is your chance to brush up on the specs before they arrive!

Both of these superphones will be running Android 2.3 Gingerbread right out of the gate. Starting with the most recent Android release will no doubt make these phones excellent candidates for Google’s next release later this year, Ice Cream Sandwich. According to this year’s Google I/O event, they are looking to build Ice Cream Sandwich into a more unified (and less fragmented) operating system by combining the best of Gingerbread with their tablet-optimized Honeycomb (Android 3.0/3.1). On the software side of things, the future for both of these superphones looks pretty tasty!

The European version of the HTC Sensation has been on sale since May 19th, but we have yet to see any devices utilizing Sense 3.0 (which they unveiled a couple months ago for the first time) here in the United States. Some of the updated UI features include lockscreen shortcuts, built-in panorama camera option, and updated widgets.

A May 11th article from the guys over at PhoneArena revealed a few of Touchwiz 4.0’s new features. The GSII will sport accelerometer-assisted zooming, advanced widget placement options, gestures (similar to some Sense gestures), wi-fi access to files stored on the phone via Kies Air on your PC, photo editing in the stock camera app, and a Readers Hub for your magazines, newspapers, and Kobo books.

Both phones will come with more modern smartphone specs: dual-core CPU, lots of RAM, huge next-gen screen technology, dual cameras, as well as the brand new MHL connector for 1080p HDMI output with 7.1 surround audio. Although, it will be hard to pin down a clear winner when so many of the hardware differences come down to personal preference. 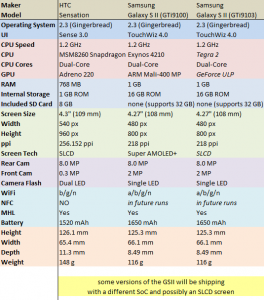 Although both phones are powered by 1.2 GHz ARMv7 dual-core processors, the chips themselves are quite different from each other. The Sensation’s MSM8260 is a Qualcomm CPU paired with their Adreno 220 GPU. To make things even more complex, there are rumors that the GSII might begin shipping with different SoC’s: either the Samsung-born Exynos 4210 or NVIDIA’s Tegra 2. Looking at past performance trends in System-on-a-Chip designs, Qualcomm SoC’s generally perform slightly below other CPU/GPU combos, with both TI’s OMAP and NVIDIA’s Tegra chips battling back and forth for the top spot and Samsung settling for third place.

Honestly, performance for these new dual-cores is close enough to where we can ignore who built the SoC and just drool over the fact that we can now have 1.2GHz dual-core processors in a mobile device that fits in your pocket. The only question I would ask myself is how badly do I want access to NVIDIA Tegra Zone’s Tegra-optimized apps? Is it worth giving up on the Sensation or waiting for a Tegra-equipped GSII to hit the shelves?

While we’re talking about GSII variants, there’s also a rumor that some of those Tegra 2 versions will sport an SLCD as opposed to Samsung’s much praised Super AMOLED Plus technology. It’s the LCD vs AMOLED debate all over again, and some users may be a stickler for the better colors and deep blacks that go along with AMOLED. However, HTC has pulled a nice move to counteract: the Sensation rocks a 540×960 pixel qHD SLCD. That’s over 256 ppi as opposed to the GSII’s 480×800 pixel 218 ppi screen (which may or may not be Super AMOLED Plus or SLCD, depending on which GSII model you happen to buy).

So those 4.3″ screens are nice, right? Well, you know what they say about phones with big screens right? BIG BATTERY DRAIN. Actually, I was more interested in what kind of protective casing will be hugging that screen. The 8.49 mm GSII is literally the thinnest smartphone ever. The next thinnest phone would be the Sony-Ericsson Xperia Arc at 8.7 mm. THAT IS THIN. It almost makes the Sensation’s 11.3 mm of thickness seem like a huge negative, until you realize that the Sensation is encased in an aluminum unibody design, much like some of Cupertino’s best exports. Some prefer a hefty, solid phone; some prefer a lighter, plastic phone.

Standard 8.0 MP rear cam’s all around. The game-changer is the GSII’s 2 MP front-facing cam versus the dinky 0.3 MP on the Sensation. Video calling might not have too high of a priority for most shoppers, but if the opportunity arises for a photo of you and some celebrity/friend/animal or your first video call to a loved one then you don’t want to spend that moment thinking about how crappy the picture quality is on your Sensation. You’ll just have to master the “hover finger” technique for snapping photos. Not the easiest solution but all your pics will be 8 MP.

Both phones get the wi-fi’s and the geebee’s. Namely, 802.11b/g/n. GSII folks get the useless addition of 802.11a, but the future looks extra bright for them: future GSII models are rumored to add NFC capability. Both phones also get the brand new MHL connector, which is essentially your USB port and HDMI out combined in one orifice. Once we get more info from which carriers pick up these phones, more details on 4G connectivity will emerge.

I saved the best comparison for last. The Sensation’s 768 MB of RAM is nothing to sneeze at, but the GSII’s 1 GB is obviously better. The biggest performance and usability difference I can see between these two superphones is how they handle their internal memory. HTC is severely gimping the Sensation. Internal ROM is flash/NAND based, and is magnitudes faster than reading data from an SD card. Figuring in the Android OS, Sensation owners might be booting their phones up for the first time only to see 300 MB of free space. True, many apps allow transferring to SD, but there is still a residual amount left on internal ROM for loading up apps. With many games coming in 20+ MB packages, you can fill up your brand new phone pretty quickly. Data access times can increase for certain sections of your apps. The GSII wins hands down with it’s 16 GB ROM. You can easily run this phone without an SD card for the entire life of the phone, and never have to deal with Class 2/4/6/10 read/write speeds. As for the game developers, show them your best trollface as you download 400 MB RPG .apk’s with ease.

HTC fanboys have a great phone headed their way, but right now you’re better off grabbing an HTC Thunderbolt (8 GB ROM), HTC Inspire (4 GB ROM), or T-Mobile myTouch 4G (4 GB ROM). As far as everyone else, buy a Galaxy S II… ASAP. Was that so hard?