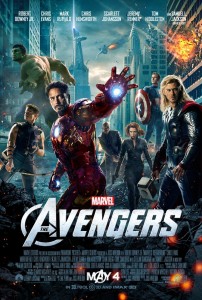 Films like The Avengers pose a bit of a problem for me. On one hand, I want to critique things like plot, character development, lighting, sound, etc. However, every time I leave a movie like this, I forget about those things and end up exclaiming things like, “Holy shit, did you see what the Hulk did? I wish I had superpowers…”.  Serious questions are not raised, instead the next two days I think about what I would do if I had the superpower in the movie.  Despite all of this, I’m going to try and look at this objectively.

First off, if you haven’t kept track of the Marvel films, starting with Iron Man, prepare to be a bit lost. The film spends most of its first 30 minutes reintroducing you to the cavalcade of characters you’ll encounter throughout the film. If you were one of the people who skipped Thor, because you don’t like to mix Shakespearean style dialogue with your superhero films, you can still get a basic idea of the plot. The plot, which takes a lot of time to get around to is relatively simple. Loki, the Norse god of mischief, and brother of our favorite Norse hero, Thor, has taken control of a device with unlimited power, the Tesseract (which we saw Red Skull use in Captain America). With the Tesseract in possession, Loki plans to bring down a galactic army down on the Avengers, and make Earth bow before him.

Much of the plot tension comes not from the fact the world is about to end, but that our heroes are all a bit sullen, and filled with problems that keep them from being part of a cohesive team. Tony Stark’s narcissism keeps him above his teammates, Captain America is a man out of touch with the current world, Thor is very out of touch with the world,  Hawkeye is…well who cares about Hawkeye? The point is that these people can’t put aside their angst for more than a second, and as they are supposed to be the saviors of it, could present a bit of a problem.  Thankfully, this is taken care of with normal Whedon-esque flair. Their angst becomes fodder for great one liners, and physical gags that play into the hands of the action film.  Whedon has proved time and time again, that he can take any type of emotion and make it work beautifully on screen.

That isn’t to say there aren’t problems he couldn’t walk his way out of, the first half of the film can get a bit boring due to all the setup. Whedon and fellow screenwriter Zak Penn toss in a few winks and nudges to Marvel nerds for them to endure backstories many of them have known for ages. Much of the film is a setup for the incredible finale. Luckily, the finale makes everything worth it.

The last 45 minutes of the film is quite possibly the best in action film history. It moves at a rapid pace, it’s tense, without ever feeling too dangerous for our heroes. On top of it’s pace, the action is littered with great comedic moments.  I dare anyone to sit through the last half of this film and not feel exhilarated.

Ten years ago if you had asked me if making a film about The Avengers was possible, I would have given a hearty, “No!”.  I thought there is no way you could focus on all the characters enough to make a compelling story. Marvel has gone about it the right way, allowing the characters to already be established in other films (and through other parts of pop culture), and merely builds upon it here.  Hiring Joss Whedon as director was damn near perfect due to his experience with ensemble casts from shows like Buffy the Vampire Slayer, Angel, and Firefly.

Many will ask if this will overthrow The Dark Knight as the best superhero film ever made, and I’m not sure I can answer that. The two films despite both being about superheroes are contained within two very different genres. Christopher Nolan has pushed the boundries of superhero films, and redefined what is possible with these stories. While Whedon has embraced every piece of comic book convention, and made it into a visual feast for the eyes. It’s like comparing a steak dinner to an incredible dessert.  The Avengers is more exciting than Nolan’s Batman movies, but it lacks the depth and tension of the Batman series.

Needless to say, The Avengers is the perfect summer film. I’d most likely going to shatter some box office records this weekend, and it will be well deserved.  Any flaws in this film are saved by it’s over the top ending. Be sure to stay after the credits, there is one bonus scene in the middle of the credits, and second one after the credits finish rolling.