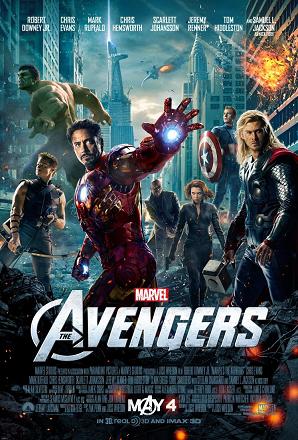 Thank you, movie gods. If The Lucky One was my purgatory, The Avengers was my reward for my patience.

By now, after the first five films set in the Marvel universe, it’s probably fair to say the fanbase has been whipped into a frenzy for this film. Each of the Avengers has had his own film (Iron Man’s had two!), and now it’s time to bring them all together.

Whoo boy. That’s about all I could say after the final hour of The Avengers.

The film opens with SHIELD director Nick Fury (Samuel L. Jackson) arriving at a research facility while it’s being evacuated. While researching the tesseract, a cube of incredible energy, it is activated and opens a portal to the other end of the galaxy. Out steps Loki (Tom Hiddleston), who takes control of physicist Erik Selvig (Stellan Skarsgard) and Agent Barton (Jeremy Renner) and escapes.

Together, the group tracks down Loki and, after a brief battle, apprehend him. En route back home, the plane is intercepted by Thor (Chris Hemsworth), the Norse god of thunder and Loki’s brother. After a brief battle between Iron Man (Stark) and Thor, the group gets Loki back to the SHIELD base, the Helicarrier.

The group works together, but it’s a fragile alliance, as they don’t completely trust each other. Things change after a deadly assault on the Helicarrier, the direct result of which forces the Avengers to realize in order to protect Earth, they’ll have to work together. Loki intends to use the tesseract to open up a full gateway and release an entire alien race to decimate Earth, and the avengers have to stop him.

I’m leaving the summary pretty brief because I’d rather not go too in-depth about all the details. The plot itself is pretty straight-forward for superhero films and won’t break any ground. The dialogue is clever and downright hilarious at times, especially when Stark is on screen. I did feel at moments the dialogue was forced, as though each line was simply a set-up for an attempt at a memorable moment of inspiration, but it doesn’t ruin the dialogue.

No, the main star of the film isn’t the dialogue, it isn’t even any of the actors who receive top billing. The acting itself is so-so, but given the straight-forward action and set-up, you couldn’t really expect a paradigm shift-inducing performance from any of the actors. * Rather, the star of the film is the fighting, and this is where the film is incredible. The fight between Thor and Iron Man is simply an appetizer for what’s to follow in the climax. The effects are smooth and in sync with each other, and the result is a film that’s not going to win points for originality, but is just…fun.

* – Also, who ever decided that every alien race should sound British? Are there no other accents on the other side of the galaxy? OR…are all Brits aliens? You be the judge.

If there was one major gripe I had about the film, it was the use of 3D. I’m not a huge critic of 3D, and I believe when used right, it can offer some incredible moments. In the film, though, it’s obvious the film was shot in 2D and then simply converted into 3D. There aren’t really a lot of moments that take advantage of the 3D until the latter half of the film, when you’ve already been wearing the glasses for an hour and a half.

Sidenote, I wish theaters had 3D glasses that fit over regular glasses. I just look silly wearing them. I’m aware that there are actually such glasses, but it doesn’t seem like the theaters I attend offer them.

This flaw, while noticeable, isn’t one that will bring down my grade of the film. It’s not original, and at times it’s incredible cliched, but it’s just too much fun to pass up. Women may not be initially interested in it, but I get the feeling once Thor, Captain America, and Iron Man get on screen, they’ll pay attention. Bottom line, if you thought the previous films and trailers were pretty cool, you’ll love it.

The Avengers gets a B+.