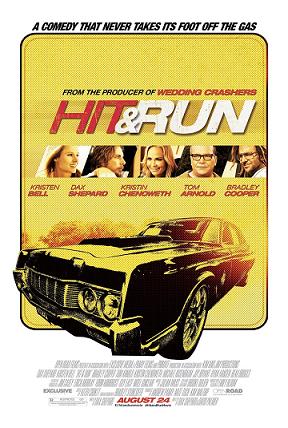 Hearing the term “hit and run” invokes many thoughts. For one, it can mean a vehicular accident. In baseball, it involves starting the runner and telling the hitter to swing at the next pitch, regardless of location. For the colloquially juvenile, it can mean a one night stand.

When it comes to the new film Hit & Run, it means…well, it doesn’t mean any of those. It’s just the title of the movie, but it’s meant to invoke the vehicular crime. Dax Shepard is a jack of all trades, having written, co-directed, and starred in the film. He also looks like the offspring of Chad Kroeger and Zach Braff, but that’s beside the point.

Charlie Bronson (Shepard) is living in a tiny California town with his girlfriend Annie (Kristen Bell, Shepard’s fiance in real life), a professor at a local community college. When Annie is offered the chance to chair her own department at UCLA, Shepard agrees to drive her to LA, much to the consternation of the US Marshal assigned to look after him (Tom Arnold).

No big deal, right? Lots of boyfriends do that. Well, it’s not so simple, my friend. You see, Bronson has been living in the Witness Protection Program for having testified against his friend Alex (Bradley Cooper). Annie knows this, but Bronson has never fully explained what he did before he entered the program for fear she’d never understand and love him.

En route, they have to stop by the house of Annie’s ex-boyfriend, Gil (Michael Rosenbaum), to pick up her teaching certificate. Upon hearing of their trek, Gil (still in love with Annie) gets the tags off of  Bronson’s ’67 Continental and, thanks to his sheriff brother, discovers Bronson’s true identity as well as the reason he went into witness protection. Desperate to win Annie back, he gets ahold of Alex (thanks Facebook!) and tells him how to track him down.

Pretty straightforward plot, pretty straightforward formula. It works, though, mainly because of Shepard. The dialogue is some of the funniest I’ve heard in quite a while. It’s not incredibly original, and it’s not exactly clean, but it feels natural. I hate films in which characters always seem to have the most brilliant, most clever responses to every situation. In Hit & Run, the dialogue simply feels like normal repartee that young adults would have with each other, and it’s hilarious and effective.

The chemistry between Shepard and Bell seems genuine, simply because it is. The two have been together for more than four years, and it’s seamless for them to go between being in love and going through arguments as couples do. Tom Arnold is added in as comic effect, and he does a solid job, although the film doesn’t really need any comic relief; the interaction between Shepard and Cooper alone is worth the admission.

I have to admit, I went into the film with pretty low expectations and left the theater entertained. Be warned, there is a bit of nudity, but it’s definitely…not something you’d desire to see. All in all, it’s a solid effort by the offspring of Chad Kroeger and Zach Braff.

Seriously. With the beard in the movie, it’s even better. Or worse.