“The Lion King” Now Playing at the Fabulous Fox Now Through September 2nd! 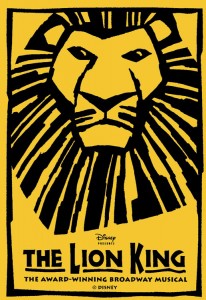 From the opening moments of The Lion King stage play, it is apparent you are witnessing something special. An almost perfect blend of technical and creative splendor that results in an awe inspiring two hours of theater. The initial shock of seeing the cast in their impressive costumes, walking down the aisles of the Fabulous Fox located in St. Louis, is quickly turned into a moment of song and dance that is sure to produce chills.

The film on which the stage play is adapted from remains one of Disney’s most successful films of all time, having grossed almost a billion dollars worldwide. So, it’s hard to think there are many who aren’t familiar of the story of a young lion prince, and his conniving  uncle Scar. However, for those who don’t know, the story loosely resembles Shakespeare’s Hamlet. Some of the more crucial elements are missing, but most of the major story blocks are there.  The uncle who conspires to kill the king to take his rule of the kingdom being the prevalent thread.  Luckily, Disney decided to make the story a more uplifting one than the famous Shakespeare tragedy. So, we follow Simba as he grows from an outcast young cub, into the eventual king his father has trained him to be.

The story doesn’t differ too much from the film, in fact the majority of the dialogue is the same between the stage production and film. So, you’ll have a sense of familiarity that helps with things like the beginning crescendo of the cast into the ‘Circle of Life’, and bit of exhaustion of some of the lines that you might have heard hundreds of times. The fact that you know what you are heading into doesn’t make the proceedings any less impressive. The production is an incredible technical feat, and the cast and crew have it down to perfection after 15 years of being in production. The numerous costume changes, the incredible puppetry, and smart cast make it easy to maintain a suspension of disbelief.

Standouts on the cast included Dionne Randolph channeling James Earl Jones as Mufasa. Randolph has an imposing demeanor and a gentle kindness that translates well into the father of Simba.  Buyi Zama is another standout as the baboon Rafiki. Her good humor resonates across the stage as she acts as a guide to the characters on stage. Overall there are no weak links in this cast. From top to bottom it is filled with talented professionals that have an extreme commitment to their roles.

The only problem to be found is one of tone. There are jarring moments where pieces of the production seem to be out of place. The most obvious one is the breakdown in ‘Be Prepared’ where it goes from a rousing number in which Scar sets his plan, and suddenly changes into a hip hop breakdown.  The abrupt change from the countryside of Africa to a C+C Music Factory video set was enough to make the next few minutes a blur. There are a couple other moments where the story is dropped in favor of elaborate dances that don’t serve the story much, but luckily still fit with the overall feel of the story.

Fans of musicals and the animated film will both find themselves pleased with the production they will see. The Lion King is a top notch show that will wow people of any age.

For more info on the show and to buy tickets. Please visit the website of The Fabulous Fox Theatre.