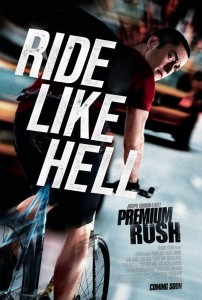 Joseph Gordon-Levitt is a busy man, with 8 credits to his name throughout 2011-2012. He was last seen just over a month ago in The Dark Knight Rises, and the wait for his next film, Looper, is hardly a month away. Not to mention he makes appearances at the end of the year in Steven Spielberg’s Lincoln and Quentin Tarantino’s Django Unchained.  It isn’t hard to think that Premium Rush looks to be the weakest of his current slate. Don’t be mistaken though, while Premium Rush might be a step behind the rest of his films, it’s still enjoyable for a late summer action flick.

Wilee aka “The Coyote Man” (Joseph Gordon-Levitt) lives his life without brakes. Wilee is one of New York City’s infamous bike messengers, who speed through traffic with reckless abandon to get parcels across the expansive urban landscape.  Despite a law degree, Wilee has decided to devote his life to being a bike messenger as to avoid his eventual fate of one of the mindless corporate zombies who roam the streets of Manhattan. His light steel framed fixie bike allows him to fly quickly through the city, but also could be his demise as NYC is a giant obstacle course for a messenger.  When Wilee takes a last minute parcel he is forced to play a real game of life and death with corrupt NYPD detective Monday (Michael Shannon), who sees the parcel as an easy way to get out of his gambling debt.

It would be wise to go into Premium Rush with an open mind. The film has a cheese factor that might throw some of the audience for a loop. There isn’t much in the film that is very believable. Characters are over the top, stunts are hard to swallow sometimes, but in the end its still very fun. The beauty of it is that the film fully commits to its vision.  It moves so quickly from moment to moment, there is little time to doubt the ridiculousness of it all. The chase scenes are entertaining and at time exhilarating. Cycling doesn’t seem like something that would translate well to film, but the results are surprisingly good.

Premium Rush owes a lot to its two lead actors, Joseph Gordon-Levitt and Michael Shannon. Shannon steals every scene he is in with his irate NYPD detective with impulse control issues. Shannon fits so easily into the role of a villain, his look, demeanor, and even his voice portray a man with a dark side. What separates Shannon apart from other actors isn’t just how menacing he can be, but how funny he is at the same time.  Gordon-Levitt is at the opposite end of the spectrum, it’s hard to see him as anything other than a hero. He has an every man quality that is sometimes in conflict with his hard edged demeanor in this film.  Gordon-Levitt and Shannon both are leaps and bounds ahead of their female counterparts in this film. Both Dania Ramriez and Jamie Chung put in shamefully bad performances. Ramriez rolls over dialogue with little finesse, and lacks much personality in her character.  Chung seems out of place doing a Chinese accent, and her timid demeanor seems very forced. Their scenes cause a lot of the film to collapse upon themselves.

If you like exciting visuals, and can gets past some of the silliness of the film, Premium Rush is a solid way to spend an afternoon. It may not be one you rush out to see in theaters, but it’s worth a watch on DVD.