Clint Eastwood has proven himself as an excellent director over the years, with several of his films being nominated for and winning Academy Awards. Unfortunately, “Hereafter” does not fall into the same category as Eastwood’s triumphs, and falls short on so many levels.

“Hereafter” tells the story of 3 different sets of people, all of whom are very different but connected by death in some way. George Lonegan (Matt Damon) is a retired psychic who is soemhow able to communicate with the dead. Marie LeLay (Cécile De France) is a French television reporter who briefly experienced the afterlife, or the “hereafter,” during a natural disaster that almost took her life. Marcus and Jason are two twins (played by real life twins George and Frankie McLaren), living with a drug-addict mother who they love very much. A tragic accident occurs while Jason is coming home from a pharmacy to pick up pills for his mother. Marcus wants nothing else more than to talk to Jason. The three sets of characters are all connected to the afterlife in different ways, and the film tells their stories and how they all come together.

Although the concept of “Hereafter” is intriguing, something just doesn’t translate well on-screen. The pacing of the film is so unbearably slow at times, that it makes you cringe. At 2 hours and 9 minutes, it feels as though it is much longer as it bounces back and forth between the three stories. Part of the problem is that trying to develop three completely different stories in one movie is tough. They want us to get to know all of the characters, and care about each one of them and what they are going through. But that kind of connection never really happens, even though most of them are very likable. But by the time the movie is over, and Peter Morgan’s script tries to cleverly tie everyone together in some grand slam finale, you are left asking “what was the point?”

The acting in the film was not terrible, for the most part, but the characters came off as pretty bland. For dealing with as complex situations as they were, you never really feel too much emotion come from any of them. Cécile De France does the most impressive job in the film, as we see her character transition from beginning to end. Her life drastically changes due to the near-death experience she experiences, and you feel the closest to her because of it. Matt Damon does well, but his character is used to living with his ability and seems experienced. Although he does go through some dramatic relationships, it doesn’t ever pull at your emotions too much. The twins, who play Marcus and Jason, were hard to watch at times as it felt often times that they were reading lines right off the pages of the screenplay. Bryce Dallas Howard plays Melanie, the love interest of Damon’s character, but will frustrate you just as soon as you really start to like her.

“Hereafter” tries to pull of something much more than it is capable of, and simply ends up falling flat. Even with a director like Eastwood at the helm, and Damon starring, it just isn’t enough to make the story any more interesting. I wish that I could say that even though it was slow at times, and doesn’t wrap up many of the stories it tells for over two hours, that it was entertaining. But sadly, it is not. I hate to say that the movie feels pointless, and try to find some kind of redeeming qualities in the story. But in this case, I cannot. 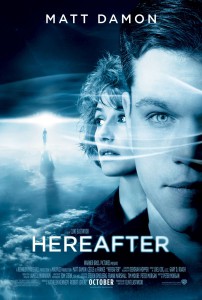