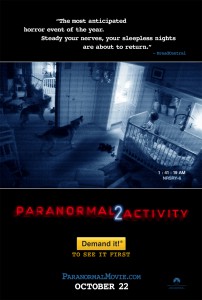 Paranormal Activity 2 is a very hard film to review.  If I say anything specific about the movie I feel as if I am giving spoilers on the whole thing.  If you have seen the trailers then you have seen enough you need to know.  A family is being haunted in a similar fashion than Katie and Micah were in the first one.  I feel like if you know anything else about the story then it takes a little bit of the enjoyment out of watching it.

I liked Paranormal Activity.  I thought it was very effective at the little things it did throughout, but talk about slow burn.  The film took its time in gradually building up the tension a little more with each passing night (emphasis on the little).  But it built up to a climax that truly had me scared at what exactly was going to happen.  My biggest issue with the first one was that it does not have any replay value.  For me, I have absolutely no desire to watch it again.  Not because it is bad, but because it will take too long to see what I already know.

I can copy the entire previous paragraph to talk about the sequel.  The film is slow.  It takes its time.  And it is all just the same.  A non-believing husband.  A Ouija board.  Internet investigation.  Loud bangs.  Dark shadows. The tension builds to a climax that you wish you could see more of.  And then the movie just ends.  I always wished the film just went a little bit more further.

I will give credit where credit is due.  The best thing they did was include a family.  The characters are much more likable in comparison to Micah and Katie who were starting to get on my nerves in the first one.  When I heard a sequel was in the works, I had a hard time thinking how they could develop since the demon was only supposed to be following Katie.  The story handles this very well, and I was impressed to say the least.

If you were a fan of the first one then you definitely need to see this.  While the scares are similar, they are better in this one.  If you didn’t like the first one then stay away from this.  We can be sure a third film will be out next October.  I am predicting this will make close to $40 million this weekend, and with a budget of $3 million that definitely means the studio will greenlight a sequel Monday morning.

I give Paranormal Activity 2 a B.