Another Take By Zac: Film Review: Harry Potter and the Deathly Hallows Part 1 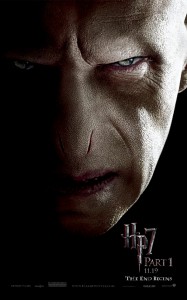 Harry Potter and the Deathly Hallows: Part 1 definitely feels like a part one, but it is executed nearly perfectly and it sets the stage for The Deathly Hallows to easily be the best of the Potter films when it is all said and done.

Picking up more or less right where the last film left off, Harry, Hermione, and Ron are foregoing their last year at Hogwarts in an attempt to track down Voldemort’s remaining Horcruxes and destroy them.  And if that sentence made any sense to you than that is all you need to know about the film.  If you don’t, go read the books!

If you aren’t a Harry Potter fan, of either the films or the books, then there is no reason to apply here as the movie will not cater to you in the slightest.  That is a good thing and the film does a great job at respecting its audience and doesn’t feel the need to flash clips to reminds us what happened every time they mention something from a previous film; ala Return of the King.

Keeping pretty much the entire creative team from the last two films is a great move, and David Yates and his team take their talents to their limit here.  The tone of the film perfectly captures the book as this is clearly the darkest entry into the series and things get grim in a hurry.  Major characters will die, the mood in this world is somber and depressing, and hope is slowly being extinguished in everyone and thing.  The violence and imagery of the film is also the most graphic yet and with some gruesome, scary, and racy images thrown up on the screen.  The film also gets a great animated sequence in the Tale of the Three Brothers that feels right at home to the series even though it is a complete departure from anything we have seen in the series.

If you are a fan of the wonderful supporting cast in this series and you haven’t read the books be warned that there isn’t a lot of faces to look at outside the core three.  We are following Harry, Hermione, and Ron as they seclude themselves in the wilderness from Voldemort’s minions and that means we don’t seem them interact with anyone really beyond themselves.  Luckily, Daniel Radcliffe, Emma Watson, and Rupert Grint all turn in their best work yet and there isn’t a weakness in the bunch.  Watson especially has picked up her game over the last two films to catch up to Grint and Radcliffe who blossomed into great actors a few movies ahead of her.  Ralph Fiennes is the most prominent supporting face as Voldemort and he is as nasty and vile as ever; Fiennes has crafted one of film’s greatest villains.  All of the other surviving characters are played wonderfully as always as with the newcomers Rhys Ifans and Bill Nighy living up the series’ pedigree.

For fans of the books that are a bit over protective of their source material there won’t be much to complain about here either.  Splitting the film in two has allowed them to include just about everything in the book with negligible changes.  In fact, I think the film even improves on a bit or two, especially with the fate of the first fatality in the film.  For anyone that needs to know what changes there are in the film to properly prepare themselves are, (****SPOILERS****) we don’t get to see Kreacher and Voldemort together in the cave and Wormtail’s fate at Malfoy Manor is decidedly different and unclear.  Other than that you would have to be nitpicking and if are going to complain over such small things than you should probably just stick to the books. (**End Spoilers**)

In the end, Harry Potter and the Deathly Hallows: Part 1 is the start to what seems to be the crowning achievement in the Harry Potter film series.  From the effects, the acting, the direction, everything is operating either at or above any other film in the series and fans will have little to complain about.  Sure the film is deliberately paced and a bit exposition heavy, but this is all build up to the film’s final act, which we will see in Part 2, and this film still manages to have its own three acts and a thrilling/heartbreaking conclusion.  I don’t know who this review is supposed to really be for as there is a good chance you are seeing this right now as it is published on the internets.  If you haven’t read the books or seen the films you won’t, and shouldn’t, start here but for me this was one of the best films of the year and a great start to what looks to be the best entry into the Harry Potter Series.

Harry Potter and the Deathly Hallows: Part 1 is an A