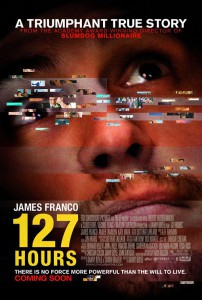 127 Hours is an intense and inventive telling of Aron Ralston’s harrowing true story that Danny Boyle makes the most out of a rather limited film experience.

Aron Ralston’s story is an unbelievable tale from the early 2000’s in which this adventurous mountain biker, hiker, outdoor kid is out on a hike when his arm gets trapped under a rock, in the middle of nowhere, and he spends the next 127 hours trying to free himself from his peril.

Now, the film is basically a one man show as we stay with Aron by himself, almost entirely, after the first twenty minutes of the film or so.  Any other faces in the film after Aron leaves a pair of young co-ed hikers are either in flashes of Aron’s visions/dreams he experiences trapped and isolated in the canyon.  Danny Boyle does a more or less bang up job of keeping the narrative moving forward and keeps things bouncing back and forth between Aron’s head and attempts to free himself and only once press our patience throughout.  The film, thankfully, doesn’t linger too long anywhere outside that one previously mentioned moment as isolation and being alone becomes rather compelling.

Boyle also does a very good job of mixing in plenty of weird and bizarre imagery/moments that will keep you on your toes as Aron struggles harder and harder to stay focused on surviving.  During the day he is trying new methods to new the bolder and at night he seems to fall into a fever dream as his body was probably being overwhelmed with infection.  All this is leading up to the moment of final desperation that will have you squirming in your seat.  Also keeping things interesting is Boyle’s wonderful use of split screen, inventive shot creation, and wonderfully capturing the isolation of the situation.    Boyle’s placement of the title card is brilliant and he also creates one of the coolest shots I have seen in years with a cross section of Aron’s arm.

The infamous moment has been discussed at great length in the media and has said to cause fainting and vomiting and I am here to report that none of that happened in my screening.  Now, I will admit that I myself did get rather physically upset watching the scene in question though it wasn’t the images on the screen as much as it was a series of factors in the theater.  First, I had just had a very rich dinner, I would not recommend this as an after dinner movie.  Second, the temperature in the theatre spiked as the whole crowd’s body temperature seemed to simultaneously rise as the moment was in sight.  Third, Boyle’s direction and scene structure along with the intensity of the situation was overwhelming.  Not only are we watching Aron do some grizzly work but the music is hyperkinetic, pulsating into your head, as the camera flashes and changes angles at a seemingly breakneck speed; it was severely disorienting.  (In fact my body is twingeing just thinking about it right now.)  So those with a short stomach you have been warned you might have to run and hide in these moments.  I have to applaud Boyle for creating such an affective scene though as no movie has ever had me react like that before.

As I mentioned, the film is a one man show and James Franco does a great job as Aron Ralston.  In literally almost every scene Franco will run you through the gauntlet of emotions with ease.  Franco deserves as much credit as Boyle for keeping the film compelling and interesting with such a limited scope and Franco never lets us down.  You feel like you are right there with Aron in that canyon in I don’t know how Franco could have done a better job at conveying the experience Ralston went through.  Franco’s ability to walk the line of losing it and barely holding it together allows for an intense character study that most of us have never even been remotely exposed to.  Isolation can do strange things to people and Boyle and Franco take full advantage of that phenomenon.

In the end, 127 Hours is an inventive film that tells Aron Ralston’s story about as compelling as possible.  The limits of the situation and Ralston’s experience keep the film from breaking any new story telling ground but the final product is wonderfully put together around a great performance by James Franco.  The intensity of Ralston’s most desperate moment of survival will have people walking out of the theater overwhelmed with emotions but the rest of the film falls just a bit short of those moments; holding the film back from absolute greatness.  Still an easy recommendation as Boyle is one of the great directors out there and it is nice to see him back on top of his game with this inventive and intense experience after a step back creatively and narrative wise with Slumdog Millionaire.