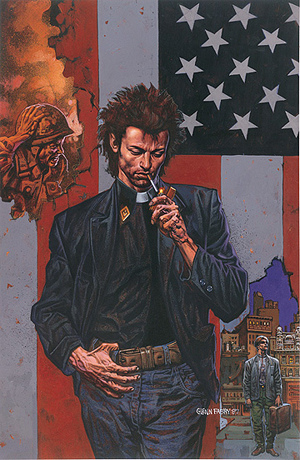 Preacher is another one of those books that is bound to offend. It follows Jesse Custer who is a small town preacher who is inhabited by a spiritual being named Genesis. Genesis is the unlikely child of an angel and demon, and might be more powerful than God.  Being possessed by this demon gives Jesse the power to use “The Word of God”, which gives Jesse the power to command people to do anything he says. His goal is to find God (who is not in heaven because of Genesis) to make him pay for his sins to humanity. He is joined for most of the trip by his girlfriend, Tulip, and his friend Cassisdy who is also an Irish vampire. Along the way there are many setbacks and big dramas to deal with. It all sounds a little hokey, but it is one of the most loved series by graphic novel fans.

Why is it good? It wasn’t afraid to push people’s buttons for a good story.  It sometimes seems some people hold back on stories like this that involve a lot of stuff taken from religions, especially Christianity. Some might consider the series sacrilege due to some of the elements and the portrayal of God. It, however, is always intriguing. It creates a whole mythology from a book that most people live and die from. Also, many times when you have a series like this with major religious themes it tends to be very dry and lacks humor. Preacher knows when to have its light moments.  There will be characters that make you chuckle a bit every time they come into the panel.

Preacher was originally optioned for a movie quite a while ago with James Marsden attached to play Custer. However, the project has tried to go through many incarnations and fell through. The source material is very dense and not easily adapted into a two hour movie. There were talks for an HBO show at one time as well, but the series was deemed to expensive to produce. Right now there is still plans for it to be made into a feature film, but who knows when that could happen.

Overall, Preacher is what you get if you mix The DaVinci Code, Buffy the Vampire Slayer, and the Punisher all in one. Sounds weird? Well, sometimes it can be, but damn it’s fun. 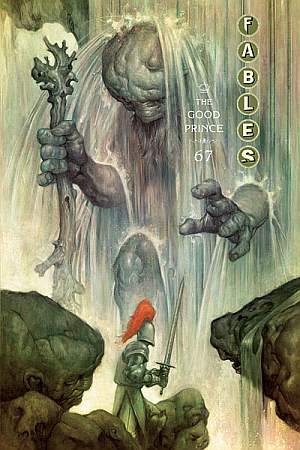 Currently the best running series in comics (at least in my opinion). Fables is the re-imagining of many fairy-tale characters. You see, all these characters once lived in the Homelands, which is where all Fables originated from. One day an Adversary appears and sets up a new Emperor on the throne and causes all out war. Many Fables are able to escape to our world through different ways. They set up a Fabletown in New York (spanning centuries) and a “farm” in upstate New York where Fables who don’t look human go (like the 3 little pigs). Now, this probably sounds like a children’s story. You might think that, and you’d be very wrong. Every arc is slightly different, but here is one thing that remains the same. The characters are very real. There is sex, murder, and lots of betrayal in the first few arcs. You will remember many of these characters from stories you heard as a kid, and see them in a whole new light.

Why is it good? Bill Willingham really turns these characters on their heads. There seems to be a lot of Prince Charmings in fairy-tales, in Willingham’s story they are all the same person. Prince Charming is a womanizer and has been married to many different fairy-tale women. One of the best characters in the series is a villain turned hero, The Big Bad Wolf aka Bigby, he is arguably probably the most forefront character in the series. He isn’t the Big Bad Wolf you remember he actually is capable of having human form, and is actually probably one of the heroic characters in the series.  Many of the main characters you will know in an instant including; Snow White, Cinderella, Red Riding Hood, Rose Red, Goldilocks, Beauty and the Beast, Pinocchio, etc.

Television rights to Fables was picked up back in 2005 by NBC, however, the idea never made it to the surface.  Late last year ABC ended up picking up the rights to make a pilot for the 2009-2010 season. It should be interesting to see if it is picked up. I’m crossing my fingers.

This series continues to pick up Eisner Awards (comic version of an Oscar) year after year, and once you read it, it will be apparent why. 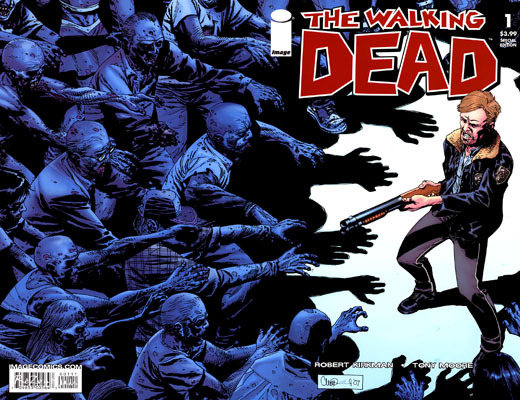 Who doesn’t love a little zombie action? What if you woke up in a hospital one day only to find it run over by zombies? Yea, sounds a little like 28 Days Later, but it’s not. The zombies in this story are a bit more Romero-esque. What if you also found that your wife, child, and best friend had all left you behind? Rick Grimes experiences this in The Walking Dead. The first trade paperback of this has him going to Atlanta, fighting zombies, and finding his family. After that it is all about survival. In a zombie apocalypse you have many characters die, so get used to an every evolving cast. The cast that does stay around will change before your very eyes as you see the stress put upon them by their situation.

Why is it good? I don’t know if it just me, but I’ve always wondered what I would do if a zombie outbreak happened. Not only that but I wondered what others would do as well. You will see characters act very natural to the conflicts around them. They are required to handle all sorts of things they never thought they would. Would you be able to kill your best friend if they turned into a zombie? What about a family member? The Walking Dead goes through all these things. The mistakes that are made that move the conflict are very human, and very real. As of late the series seems to have lost its footing, but it could still make a comeback.

As far as I know this has not been optioned for a tv show or a film. Which is kind of surprising, because out of the stories I have listed here, this is probably the one that lends itself most to adaptation. It picks up a lot of its cues from old zombie lore and movies. The kind of gore that it would require could only be done on a network like HBO or Showtime, but I am sure the expenses would be pretty high. With it’s popularity, and the popularity of the horror genre, I am sure it will be made into a movie in no time.

If you are a fan of zombies/horror or even survialist stuff like The Stand, then this is a great series for you.