“GREASE” is the Word – Review of Opening Night at the Fox Theater in St. Louis

Last night at the Fabulous Fox Theatre, “Grease” WAS the word. Located on Grand Blvd. near the St. Louis University Campus, songs from this long time Broadway favorite resonated through the auditorium of the magnificent and historic venue.

Grease is the story of Danny Zuko and Sandy Dumbrowski – two high school students who met at the beach and had a summer love. Flash forward to the end of summer, and the beginning of a new school year at Rydell High. On the first day, Danny and Sandy realize that their plans had changed, and they are now both going to the same school. But trouble follows, as Danny tries to maintain his cool-guy image as leader of a not-so-tough guy gang called the “T-Birds.” Sandy is still the same sweet and innocent girl that Danny met at the beach, but doesn’t fit in with his high school lifestyle. But luckily for Sandy, she is taken in by the “Pink Ladies,” a fun-loving group of girls who are happy to show her how things are done at Rydell. The result is a witty and entertaining show that is full of laughs, and packed with catchy songs that will stay on your mind long after the curtains close. 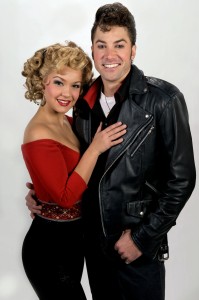 This production of GREASE is very unique, in that it follows the plot and songs from the 1978 film more closely than its predecessors. This is sure to please fans of the classic film, and audiences that have grown up wearing out their VHS players from singing along to such songs as “Hopelessly Devoted to You,” “Grease,” “Sandy,” and “You’re the One That I Want” – all of which are featured in this show. Directed and choreographed by Tony Award-winner Kathleen Marshall, this version of GREASE is sure to please fans of the film and Broadway show alike.

After some pre-show entertainment from an extremely talented Vince Fontaine (Dominic Fortuna), the show opens with “Grease” – the opening song from the beginning of the film version. The T-Birds: Kenickie (David Ruffin), Sonny LaTierri (Nick Verina), Roger (Will Blum), and Doody (Jesse JP Johnson) emerge from a colorful backdrop of lockers, and sing the iconic song. From the very beginning, we learn who these characters are, as they comb back their greased hair and flip the collars of their leather jackets. The opening number leads us into the cafeteria of Rydell High, where we meet the “Pink Ladies” – Rizzo (Laura D’Andre), Marty (Kelly Felthous), Jan (Bridie Carroll), Frenchy (Mate Morgan Chadwick). As they eat lunch and discuss their new class schedules, Frenchy introduces the ladies to a new student – Sandy Dumbrowski (Lauren Ashley Zakrin). At this point in the show, the stage is divided into two parts: the cafeteria on the left, and the front steps of the school on the right. As the pink ladies ask Sandy about her summer, Danny Zuko (Ace Young) has entered the stage and met up with the T-Birds – who ask him about his summer. This leads into the song “Summer Nights,” which meticulously cuts back and forth between Sandy and Danny, singing about their perceptions of the same summer love. Sandy’s version is sweet and romantic, as Danny’s is embellished with inferences of something more. The voice and on-stage charisma of Ace Young set the tone for the show, as they are equally matched by the talent of Lauren Ashley Zakrin as she portrays Sandy.

The first part of ACT I is full of songs that will have audiences toe-tapping along to, like “Those Magic Changes” which is performed by Doody. It is with this number that we are given a true insight into the talented vocal ability of Jesse JP Johnson. He is a true entertainer, as he takes over the stage during this dream sequence – performing for all of his fans. We then leave the guys at school, and are taken to a slumber party that the Pink Ladies have invited Sandy to. Marty sings “Freddy, My Love” with the Pink Ladies, which is an incredibly fun insight into her relationship with a Marine stationed overseas. The number that follows is sure to be another crowd pleaser, as we see Kenickie’s old junker transformed into “Greased Lightning” before our eyes on-stage. This is the number in which David Ruffin lights up the stage with his lead vocals, as the guys back him up and perform a spectacular dance number around the car. But it isn’t until the next number that we really get to see Will Blum and Bridie Carroll shine! Both of their vocal ranges are quite impressive during the song. And if the first ACT wasn’t already impressive enough, the production rounds it out with “Look At Me, I’m Sandra Dee” and “We Go Together.” The former is a truly entertaining performance from Laura D’Andre as Rizzo, and the T-Birds and Pink Ladies come together for a strong finish with the latter.

At this point in the show, it seemed that the general consensus from the audience was that they couldn’t wait for intermission to end so that what we could get back to Rydell High. ACT II opens with the school dance, hosted by charismatic and energetic DJ Vince Fontaine. Dominic Fortuna really gets the audience into the dance, and makes you feel like you are right there with them. After “Shakin’ at the High School Hop,” the next performance is “It’s Raining on Prom Night” – sung by Jan. Here we get to enjoy another strong vocal performance from Bridie Carroll, accompanied by Lauren Ashley Zakrin as Sandy sits alone. Up until this point in the show, it is hard to beat the performances that have already happened – but the next number does just that. Vince Fontaine sings “Born to Hand Jive” during the big dance competition, where everyone on-stage is a winner as far as I am concerned. This is one of the most entertaining numbers in the show, as there is a lot of humorous dancing along with an equal amount of talent. In a touching scene after the dance ends, Sandy sings “Hopelessly Devoted to You” while Danny sits stage right on the barely lit bleachers. This is where we really see how Sandy feels, without trying to cover up her feelings or act like Danny doesn’t matter to her. 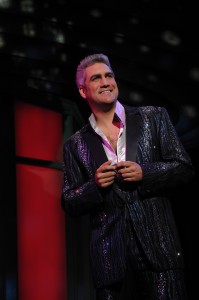 One of the characters who is constantly trying to find themselves throughout the story is Frenchy. She can’t seem to find the right school, right career – or even the right hair color. But her innocence and good nature make her an extremely likable character, and Kate Morgan Chadwick does a tremendous job in the role. As she tries to figure out what to do, she is visited by Teen Angel – played by American Idol Winner Taylor Hicks. Here he sings “Beauty School Dropout” with a great backdrop and props. Hicks turns a performance that could be simple and without much character, into something fun and very animated. It is a shame that he doesn’t have any other scenes in the show. But Taylor Hicks fans will not be disappointed with what they see. Shortly after, we see Danny realize how much Sandy means to him, as he sings “Sandy” at the drive-thru. This is another number where Ace Young really shines, and puts a lot of emotion into his performance.

The last half of the show does not disappoint, as it seems like the the performances just keep getting better and better. “Rock ‘n’ Roll Party Queen” is a fun number, performed by both Danny and Roger at a party with the T-Birds and Pink Ladies. But it pales in comparison to the passionate performance that Rizzo gives as she sings “There Are Worse Things I Could Do.” During the song, Laura D’Andre shows off her powerful voice, and gives it everything she has. This is amongst the standout performances of the show. Sandy goes on to sing the reprise of “Look At Me, I’m Sandra Dee,” leading us into the final scene.


The end of the performance is a whole lot of fun, and the last two songs make a strong finish to what is a truly delightful show. As Sandy and Danny come out ready to get what they want, they break out into “You’re The One That I Want” with the rest of the cast. It is a whole lot of fun seeing everyone packed into the Burger Palace, and performing this energetic number. And in a perfect finish, the cast goes into the reprise of “We Go Together.” It is at this point that there is no doubt in my mind that most of the audience will be wanting to go see the show again!

In the end, this performance of GREASE is one that you do not want to miss while it is in town. The show runs from January 12 through the 24. The entire cast does a fantastic job throughout, and the set design and music are superb. The show is full of iconic songs and great performances, that will keep you having fun from beginning to end. And if you are a fan of the movie, you are sure to love this version. 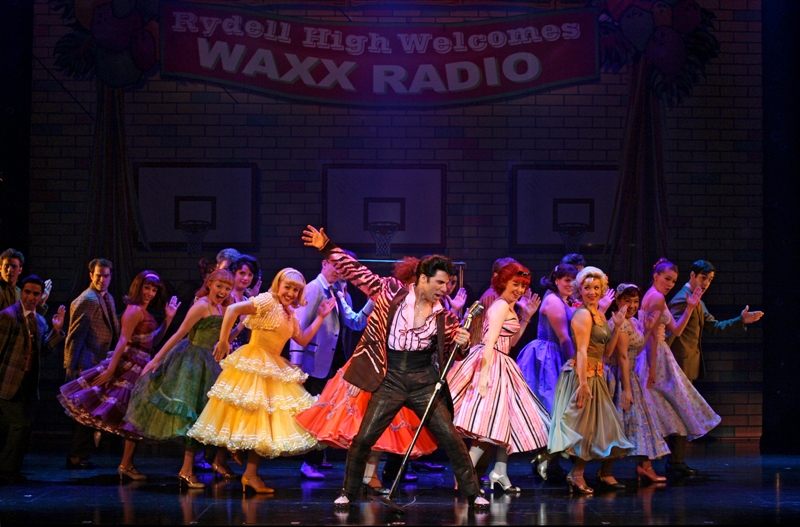