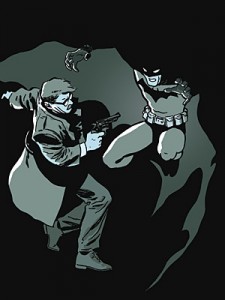 I had heard a lot about Batman: Year One before I read it for the first time.  Comic geeks gush over Frank Miller, especially his work on The Dark Knight Returns.  I personally do not see the exceptional piece of work that everyone else saw with that book, but it was good.  I can tell you that after reading Batman: Year One three times that it is one of my favorite Batman stories ever told.

As the title suggests, the story focuses on the beginnings of Batman’s career.  A time that coincides with the arrival of Detective Jim Gordon in Gotham City.  He is an honest cop in a corrupt city where you can’t trust anyone.  But his fellow cops can’t touch him since the papers love him.  He is the new hero cop that the city has been waiting for.  Jim is worried about raising a family in the city.  His wife, Barbara, is pregnant with their first child.  But Jim is going to need some help if he wants to clean up the city.

Bruce Wayne decides he is going to help.  On one of his first adventures he travels to a seedy part of town where he is attacked by prostitutes that include Selina Kyle.  He escapes from the cops that arrive badly hurt and seems barely alive when he makes it back to his manor.  He asks his dad for guidance just before a bat crashes through the window.  Batman is born.

Batman soons works his way up the chain of crime from petty thiefs to corrupt cops.  Batman crashes a party attended by several crooked politicians and the city’s main crime bosses.  Commisioner Loeb has had enough so he puts an order out for Batman to be brought in by any means necessary.  Gordon tries to hunt him down with his partner while Batman makes an unsuspecting ally in assistant district attorney Harvey Dent.

Batman is soon trapped in an abandoned building by the city’s SWAT team.  Television crews capture most of the action.  While he does escape, he inspires Selina Kyle  who watched the whole thing.  She soon takes up a costume of her own to start a life a crime.  She soon becomes frustrated since Batman is given the credit of her robberies.  In trying to set herself apart she interrupts Batman trying to discover Falcone’s plan to take down Gordon. 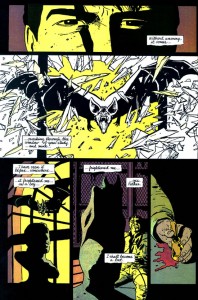 The next night Gordon is called in by the Commisioner about a petty crime.  While leaving he notices a motorcyclist speeding into his apartment complex.  Suspicious, he turns around to find a Falcone’s nephew with Barbara and their new born son.  Gordon does what he can to stop them, but they get away.  Gordon shoots the motorcyclist when he goes after the car who turns out to be Bruce Wayne.  Gordon hops on the bike to chase down the car who no longer has Barbara, but his son is still in danger.

Gordon shoots out the car’s tires on a bridge where it crashes into the side.  Falcone’s nephew jumps out with baby in hand.  After a fight with Gordon, the baby is dropped over the side to the river.  Bruce Wayne jumps down to save the baby.  Without his glasses, Gordon can’t see that the man who saved the child is in fact Bruce Wayne.

The story ends with Gordon meeting Batman on the police precinct rooftop so that they can discuss a new madman on the loose who calls himself the Joker.

If you thought a lot of scenes in the stories sounded familiar you are right.  Christopher Nolan has admitted that this story has been a big influence on his Batman franchise.  The final scene in the book mirrors the scene that ends Batman Begins.  Also, many of the characters are featured in that film.  Specifically Flass being Gordon’s partner and a corrupt cop.

Also, the scene in which Gotham SWAT tries to take down Batman in the abandoned building inspired a similar scene that was featured in Batman: The Mask of the Phantasm.

Overall, this is a book that needs to be read by any Batman fan.  If you love Batman Begins and The Dark Knight then you should check this out to see just what inspired the creators of those films.  But if reading is not your thing, an animated film based on the novel will be released in September.