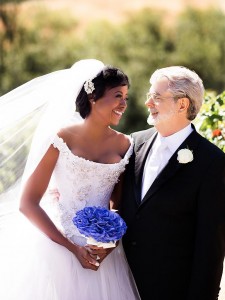 Star Wars Creator George Lucas and his girlfriend Mellody Hobson, president of Ariel Investments and chair of Dreamworks Animation, tied the knot at Skywalker Ranch on Saturday, June 22. The couple has been dating since 2006, and got engaged in January 2013.

Here are 5 things we want to see in the new Star Wars trilogy.

According to the Huffington Post, the two were wed by Bill Moyers – who interviewed Lucas for The Mythology of Star Wars in 1999. The wedding was photographed by Donna Newman, who has captured many celebrities for weddings including Katherine Heigl and Josh Kelley, Howard Stern and Beth Ostrosky, Ali Larter and Hayes MacArthur, and Adrienne Williams and Christopher Bosh.

Among Lucas’ celebrity friends in attendance for the nuptials were Star Wars actor Samuel L. Jackson and Director Ron Howard. The two took to twitter after the ceremony, saying:

Let's give a Galactic shout out to Master George Lucas & his Bride Melodie on This their WEDDING DAY!! Congrats!!!!!!

Although J.J. Abrams is set to direct Star Wars Episode VII after Disney’s acquisition of Lucas Film for $4.05 billion, Lucas has still yet to talk with the director about the sequel. He told Access Hollywood in an interview, “I have not spoken to J.J. He’s been busy with Star Trek, and I’m sure that he’ll let me know when he’s got some questions.” I’m sure Lucas has been busy enough with the wedding plans.

Disney is planning a 2015 release data for the new Star Wars film, so they better get talking soon. Although he no longer owns Lucas Film, he has been given the role of “creative consultant” for all future projects.