Just a year ago, the thought of more Star Wars films was as big of a fantasy as the films themselves. George Lucas has maintained that the prequel trilogy would be the last Star Wars films, but he would continue to produce content outside the silver screen. We’ve had promises of live action TV shows to keep us going, but even those haven’t come to fruition. Then just a short while ago, Disney bought Lucasfilm and announced that they would be continuing the Star Wars saga.  Elation was the feeling of most geeks (myself included), followed shortly by doubt. Why doubt? You’ve seen the prequels right? Visually entertaining films that lack a swiftly moving plot, memorable scenes, and a script that was entirely laughable? What’s to say we don’t get more of that?

It’s very likely that we could see another sub-par trilogy, but without Lucas writing the script, we might see some fresh takes on the material. It could once again crown itself as an epic for modern times. Just like we did with Man of Steel (read it here), we are listing 5 things we think could improve the next trilogy: 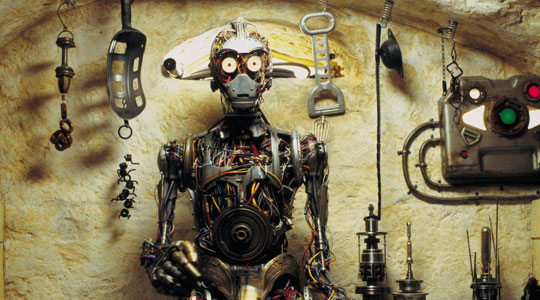 5. Keep the fan service to a minimum

It might seem a bit odd to be writing an article from a fan’s opinion, and then immediately start out with keep the fan service to a minimum. I don’t count though, they should listen to everything I say, because I’m right all the time. (Ask my girlfriend.)  However, the amount of fan service in the prequel trilogy was a bit over the top. Some of it might have worked, while other parts of it just came off as Lucas trying to appease his audience for his lack of plot movement. Things like the appearance of Chewbacca and Greedo throughout the prequels were highly unnecessary, and added no value to the plot.  The inclusion of R2-D2 and C-3P0 could have been a great piece of fan service, but they complicated a plot that already had trouble holding together. They added questions like, “Why doesn’t Darth remember the droid he built?”. These added complications to the plot that help destroy the magic of the original trilogy.

You might say that the entire prequel was one piece of fan service. Fans had long been pestering Lucas about doing a trilogy about the origins of the greatest villain of all time, Darth Vader. Lucas wanted to wait until special effects could live up to his vision, so he could murder his legacy in style. The idea of the prequels had built up in the minds of fans for so long, that Lucas could’ve made masterpieces and fans would have found hundreds of things to complain about. He didn’t make a masterpiece, and instead paid for it with the ire of his fans. Despite the critical reception of the films, they’ve made enough money that the brand is still very strong and is one that Disney could make billions off of in the years to come.

Are they going to fix it? Maybe. Geeks/nerds love fan service. There is a reason it exists. Some people live these worlds in their heads all day long, and they want to see certain things happen. These people also tend to be the most vocal. 30 years ago it might not be much of a problem, as the opinions were kept within groups of friends. With the dawning of the age of the internet, these opinions spread like wildfire and can kill a film.

Cue J.J. Abrams, the man who brought back Star Trek. Abrams put in plenty of fan service into his film, but it never detracted from the plot. He worked in the Kobayashi Maru, “Damnit Jim, I’m a doctor…”, “Live long and prosper”, etc. He did all of this without detracting from the plot. They might have illicited a few groans from some people in the audience, but they never brought the story to a halt or created unanswerable questions. Abrams could do the same thing with the new Star Wars film, and appease the rabid fans, without alienating new ones.