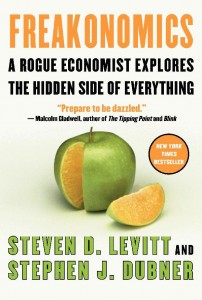 The folks over at Tribeca Film Festival has announced which film will be closing the festival this year. Freakonomics a documentary based off of the book “Freakonomics: A Rogue Economist Exposes the Hidden Side of Everything” by Steven Levitt and Stephen J. Dubner’s New York Times bestseller.  The film is being made by some of the best of the best in documentary film making these days, including Morgan Spurlock (Super Size Me),  Seth Gordon (King of Kong: A Fistful of Quarters), Alex Gibney (Enron: The Smart Guys in the Room), and Rachel Grady and Heidi Ewing (Jesus Camp).

The book covered economist Steven J. Levitt’s use of economic theory in non-traditional ways. The book was controversial at times due to some of the subjects it covered, but much of it is backed up by solid evidence. Levitt and Dubner were able to lay out complex ideas in ways that an average reader could understand, and be entertained by. The film should cover much of the same.

Opening the festival will be Letters to Juliet starring Vanessa Redgrave and Amanda Seyfried along with Oliver Dahan’s My Own Love Song, his first English film, starring Renee Zellweger and Forest Whitaker.

If you’ve never read Freakonomics before go ahead and check it out. You may not agree with everything in it, but he presents some awesome evidence for his points. All of his points have multiple forms of solid evidence to back them up. Plus, it is fun to see some pre-conceived notions that most people have turned upside down.