Before I bust into the outfield preview, a thought on the NFL draft.

Today’s the pro day at Oklahoma, where Sam Bradford is expected to throw 50-60 balls. Unless he becomes the NFL equivalent of Chuck Knoblauch, he’s widely expected to solidify his status as the number one pick. Honestly, the more I hear about Bradford, the more I like him. And, as noted by many others, the Rams fan base is running out of patience. If the Rams pick Suh or McCoy, it’ll be the third consecutive year the Rams passed over a potential franchise QB for a lineman.

And now, on to the Cardinals

The outfield is one area where the whole can truly be considered greater than the sum of its parts. Hollday’s typically considered a top-15, top-20 outfielder, but Ludwick and Rasmus are further down on most people’s lists of top outfielders. This is unfortunate, as the Cardinals boast one of the top overall outfields in the majors.

He of the monster contract signed this offseason (great grammar there) enjoyed quite a resurgence with the Cardinals last year, hitting more home runs and driving in more runs in 63 games with the Cardinals than he did in 93 with Oakland. Perhaps this was due to the change back to the National League, perhaps the fact that he was hitting behind Pujols, perhaps the innocents he slaughtered in sacrifice to the baseball gods.

Whatever the reason, the fact remains that Holliday returned to the Birds to provide more stellar offense, veteran leadership, and Gold Glove-caliber defense. 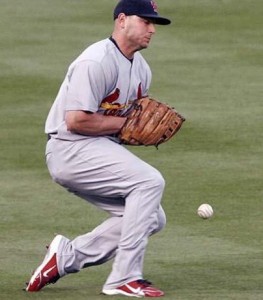 Okay, two out of three, maybe.

Jokes aside, Holliday truly is an elite hitter. He’s much derided for his ball-on-balls action in Game 2 of the NLDS, but the fact remains that were it not for him, the Cardinals would most likely not have made it to the postseason at all.

Holliday’s consistently hit well at Busch, but it’ll be interesting to see how a full season will project. Coors was a little more forgiving for power hitters, and Busch is considered a neutral park (favoring neither hitters nor pitchers).

The stinky cheese man worked his way through a decent rookie year, and he’s absolutely torn up spring training pitching this year. However, as I mentioned in my first post, sophomore year is traditionally a slump, often attributed to improved opposing scouting and for some, the onset of puberty. 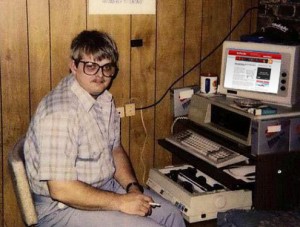 Where the women at?

Rasmus is only 23, and he was one of the few bright spots last postseason in the Cardinals’ lineup, so perhaps he can avoid the sophomore slump. He needs to work on his overall consistency, but his defense is sharp, and he’s historically picked up the pace after slow starts.

Studwick regressed a bit from his monster campaign of 2008, when he hit .299/37/113, so no doubt he’ll be out to prove that his (thus far) career year wasn’t necessarily a fluke. He was, admittedly, doing quite well until he suffered an injury midway through the season, forcing a stint on the DL. When he came back, he wasn’t as effective, but he still did manage to drive in 97 runs. He’s a solid right fielder and will give Holliday protection from the five hole. Heh. Five hole.

The man who looks like Aaron Miles’ long-lost (and slightly hungrier) brother has hit well this spring and is vying for the role of backup outfielder along with Craig and Joe Mather. Nick is little more than a reserve, but he has hit nicely in pinch-hit situations (5 for 15 last year).

Mather struggled through injuries in the minors last year before he was called up to the big league club. His average was fairly unspectacular, but he showed signs of power and a decent glove. He will most likely make the team this year as the fourth outfielder, especially since he can also play first base to give Albert a break.

*NOTE: In the previous preview, I mentioned that David Freese had not played a major league game. This is erroneous, and my fact checker is currently being beaten for his ineptitude.

Thanks to Nick Eckl for pointing this out.

Next preview, starting pitching and the glory that is Wainwright/Carpenter.