Reboot Mania: “Godzilla” Coming Back Bigger Than Ever 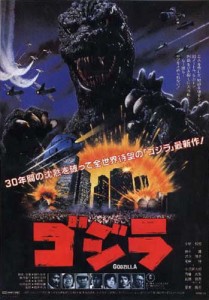 If there is an ultimate monster in film making, it has to be Godzilla. King Kong is right up there, but Godzilla has cropped up through the years so often that he seems almost immortal. Unfortunately, the last time a Godzilla movie was released, the high expectations were quickly dashed. Roland Emmerich’s disaster meets monster mayhem masterpiece plodded along at the box office, and didn’t seem to hit even the lowest of expectations.

Legendary Pictures and Warner Bros. now want to bring the famous monster back to the big screen.  Legendary has accquired the rights from Japanese company, Toho Studios, and are ready to bring the property back.  Legendary hopes to announce a director soon, and prepare for a 2012 release of the new film based on the legendary character.

I still remember seeing the trailers for Roland Emmerich’s 1998 Godzilla film, and at the time I thought it looked pretty cool. Once I saw it in theaters I was beyond disappointed. I was only 14 at the time, and in all honesty it was pretty easy to entertain a 14 year old version of myself. Although, I did manage to enjoy the soundtrack, and I still listen to it from time to time (mainly “A320” by the Foo Fighters). Despite it being a disappointment it still went on to gross $379 million dollars. I’m sure Sony cried all the way to the bank.

Do you think it is a mistake bringing back Godzilla? Let us know in the comments!