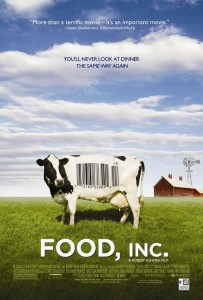 The latest documentary to come around to educate us about what we eat is more of a call for regulation mixed with education on the subsidizing and corporate environment of our food in this country and it does it entertainingly without grossing you out.
Our guides for this education lesson are a pair of prominent authors in the pulling back of the vale on the food industry. Eric Schlosser is the author of Fast Food Nation and Michael Pollan who has written a couple books on the subject and the two basically take us back and forth discussing varying topics and education us on how are food is raised, grown, produced, and enlighten us on how we are not eating what we think we are. We are sold the idea of these classic farmers still laboring to grow us plants, raise our livestock in wide open spaces, and all with a nice red barn in the background. But the truth is that we have streamlined and made the process cost effective while simultaneously harming and sacrificing quality over quantity and where only a handful of companies are controlling the food market.
Slaughter houses are in environment that is unsafe and unsanitary for everyone involved from the animal, to the employee, to the consumer. And while we are still raising animals to be killed for our dinner plates the process has become brutal and appalling on a number of levels. Animals are mistreated, drugged, and forced to live in inhospitable environments that are helping to spread disease and death through not only the livestock but into our homes.
Added to the unsanitary nature our meat is being produced, our plants are being genetically modified. Now, before you get all up in arms, this isn’t a bad thing, the problem comes from the patenting of seeds and plants and allowing the corporations to control the entire life span of those products and are threatening and/or ruining farmers finances over patent infringement. You find in the meat industry as well that that the corporations are strangling its farmers from change by holding them financially hostage by keeping them in debt.
In fact, the main message of the film is that these companies are going along unregulated and unmolested in the way that they carry themselves and their companies. Getting ex-employees and supporters into prominent government positions that allow the un-regulation to continue and the film is trying to raise awareness that this needs to stop. They are essentially the new big tobacco and we need greater regulation and control over these companies that have far too much control in power to keep things the way they want to, even if it is at our expense.
There was one thing that did bother me about the film though and that was this lady who comes on as an activist and I can’t take her seriously even with her story because she comes across as someone grabbing for attention and I don’t buy that she isn’t looking for pity; why else would she be here? I feel like the filmmakers also try and use it as a cheap attempt getting an emotional reaction out of the audience. Other than that, no real complaints.
In the end, Food, Inc. is full of a number of intriguing facts and delivers them very easily and without preaching to you. The film is slickly produced but felt like it could have been even more effecting. Calling for action on the government level the time for change is a now. The incorporating of the food industry is contributing to our poorer health, poor work places, and awful treatment of employees and animals in their system and the time for change is now. We have to make the change though and the film finishes with steps as to what you can do with the hope that our food processes and industry can become better for everyone involved. The film will only help this change so I encourage you to seek it out.
B-