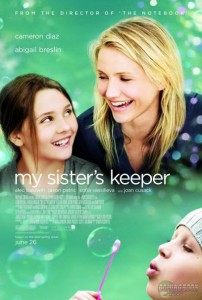 Nick Cassavetes latest adaptation is done well but strangely lacks any earned emotional punch and comes across as just expecting your emotion from the subject matter instead of working for it.
Kate has leukemia and she isn’t winning the fight. Her sister Anna has been a great medical asset for her through the years, constantly contributing to her recovery since she is a perfect match for Kate; and this is not a mistake. Anna was engineered to be a perfect match and born specifically to help keep Kate alive. Anna is sick of helping out though and decides to scratch some money together and sue her parents for the medical rights to her body, allowing her to make all decisions on whether or not she helps out her sister. The sisters mother is an ex-lawyer and will do anything for Kate and isn’t afraid to be a bitch to get it. So when her daughter sues her, which will lead to essentially the death of Kate, as she is in renal failure, she defends her and her husband in the case for Anna’s medical emancipation. The film from here jumps between flashbacks of the family’s life and drama surrounding the case over Anna.
Now, obviously this film is not a happy tale. The story deals with a very sad subject matter and things never look very good in the present day of the story. Add into this all the family drama over the court case and you would think you would have pretty emotionally poignant film, right? Well, not really. For the first half hour or so you are actually a bit disoriented as each family member gets there moment of narration and explains things a bit, plus we are trying to figure out who these people are in the middle of crisis; it’s not the easiest task. The film as a whole is actually a bit of a mess when it comes to keeping track of time, not so much that you can’t figure it out, but it takes you out of the picture as you gather yourself.
As I mentioned in the intro, I also don’t think Cassavetes really did a whole lot to help us feel for any of these characters outside of Kate. Sure we feel sad for these people, but we don’t really connect to them unless we have unfortunately had to go through some sort of medical crisis as they have. Thankfully I haven’t, but that doesn’t mean I shouldn’t be able to feel strongly for these people and what they are going through. We feel like we are skimming the surface on a lot of these characters and the only one we really connect with is the one that gets the most focus; which I already mentioned is Kate. Cassavetes and company practically don’t even touch on two of the family members, the brother and aunt, who are always around but we barely get anything out of them at all. And I understand, the book has more room to breath and flesh people out, but should you have eliminated a these characters since they were not essential to this film’s version of the story and used that extra time on them for the main characters; it is a fine line.
When the film does work though, it works quite well. Most of the film is average melodrama affair that never elevates itself except for the middle part of the film that focuses on Kate’s love interest and their escapades. This part of the film really pulls you in after the jumbled start and you really feel for these two kids as they fall in love. The only thing about it though is that they wuss out on the emotional punch in the end of their tale.
Also of note, the music used in this film is beyond awful. Someone should never work again for the music selection on display here. It is distracting at how bad and disgusting it gets as they pump sappy sentimental awful music through the soundtrack.
Alec Baldwin’s lawyer character brings some needed humor to the proceedings and is the most entertaining element of the film. Abigail Breslin plays Anna and is a bit all over the place in how convincing she is, but I guess she comes out on top in the end. Jason Patric is good as the dad and while there isn’t a lot to him in the film he brings a good performance throughout. Cameron Diaz is appropriately bitchy and over protective in the role of the mom, but her character is written with some serious flaws that are a bit spoilerish. Let’s just say her character doesn’t act the way you think she would and she comes across as bad, but it’s the writing, not her. Sofia Vassilieva plays Kate and is the stand out in the film. She is incredibly convincing as a cancer stricken patient and is upsetting to watch at times. The blood, the vomiting, its hard to watch and she does it all, props to her for that and she did a good job in most dramatic scenes as well.
In the end, My Sister’s Keeper is an interesting story that plays easily to your emotions but could have been much more. Is it too thinly written characters, in need of a longer run time, to jumpy of a timeline, or poor direction? I don’t know, but you feel like the film could have been more affecting then it was as well as the story more engaging on the screen. But the performances are all good for the most part and it never really drags and will hold your attention even if it doesn’t affect you as strongly as it could. So if you are up for a tear jerker type film, you could do far worse but you could also do far better, so don’t expect anything amazing but you shouldn’t be too disappointed.
C-