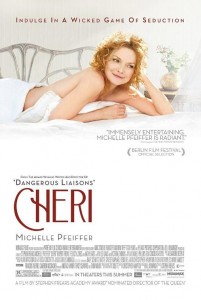 The latest from Stephen Frears starts off well enough, having fun and well spirited but by the end is a bit of a sappy, overly dramatic, melodrama that almost negates the good start.
Lea is a courtesan, one of the best at that, in France. She is so successful at what she does that she is even able to lives a lavish and expensive lifestyle even when she isn’t courting and entertaining a man. She owns her own place, has beautiful clothing, and in home service help. The only problem is that she got this being a courtesan and that does not bode well for her social life as no decent woman of her social stature will socialize with a know courtesan. So Lea is left to socialize with her peers, both retired and working, and while she didn’t particularly enjoy there company she was left with no other options. Madame Peloux was one of these women, since retired, but wealthy and in good living conditions as Lea she spends her time entertaining guests having dinners, tea, and social functions seemingly all the time. Peloux and Lea spend most of the time going back and forth trying to out class or out wit one another with who is leading a better life in what is ultimately a dick measuring contest between two women. Peloux’s son Chéri, a nickname derived by Lea, is a bored and socially exhausted nineteen year old. Taking in drinking, whoring, and late nights almost every night of the week, Chéri feels like he needs a change and jumps on Chéri’s invitation to get away for a while at her retreat in Normandy. The two head off and sparks begin to fly leading to more than each of them expected and a tale that will pull them together and apart as the years go on.
The film is quite sharp to look at and rather entertaining for the first hour or so. A narrator takes us through our story and there is plenty of good humor and knowledge to be learned about the world of whoring in early 20th century France. The film moves at a whip pace and is charming, witty at times, and creates a fun world to hang around in.
It’s when the film’s tone quickly changes and becomes more of a story of jealousy and pettiness then anything. These two somewhat likeable leads quickly become rather unlikable and there isn’t a lot to get behind in the end when it is all said and done. Even the fun narrator disappears for the most part at this point and it’s almost like watching a completely different movie. Frears’ film does look fantastic though, and script is rather well done as well. Fans of period films will have plenty to like as they do a great job of recreating the social scene of the early 20’s Paris scene, but unfortunately the films story couldn’t pull through from start to finish.
The acting in the film is a bit of a mixed bag here as well as everyone has ups and downs in the cast and no one really knocks it out of the park. Michelle Pfeiffer plays Lea and she is a bit all over the place. Cool, sexy, and smart one minute, then hamming it up a bit while taking it a bit over the top in some of the more intense scenes during the later part of the film; she never finds her grove. The worst moment of the film comes from her as well when she calls out Chéri’s name awaking from a dream that is just awful, you will know what I mean. Rupert Friend is quite good as Chéri most of the time, but his performance still feels uneven from time to time and he comes across a bit too whiney and weak for my taste in the later part of the film. Kathy Bates is the closest to being great as Charlotte Peloux; though even she has moments of being a bit much at times it is mostly effective and the funniest part of the film. Felicity Jones plays a suitor for Chéri and she is quite good with what little she has to work with. I feel like I have seen her somewhere before, but I am looking forward to her upcoming work regardless as she is a young actress to watch (look for her to break out in Cemetery Junction if she has a big part). Other than that, Frances Tomelty is solid as Rose, Lea’s main attendant and she takes advantage of ever scene she gets.
In the end, Chéri is a mixed bag that is by no means horrible, but isn’t that great either. The film starts off with a ton of potential that slowly melts away and never comes back to the fray. The performances can be a bit all over the place, but are quite solid when they are in fine form. Frears made quite a pretty and fine looking film but the tonal shift and drop in a compelling finale hold this back from being anything above an average period picture.
Chéri is a C