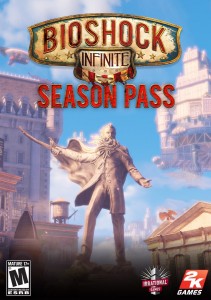 Get the Season Pass on Amazon for $19.99 – includes part 2 when it becomes available!

WARNING: Minor spoilers below – Do not read unless you have completed Bioshock Infinite

Nobody had any idea what kind of story what would be told – and as it turns out, neither did Irrational. Ken Levine, Creative Director at Irrational Games, tells a room full of press that the idea came to him while he was running. He wanted a story that would draw players in, “I have this image in my head of Elizabeth dressed like a femme fatale coming into Booker’s office in Rapture. Well, how do we get there? A lot of people have asked us to tell a story about pre-fall Rapture. To me, it wasn’t really interesting, because it’s the midichlorian problem. We already told the story in the logs, so it would just be demonstrating that, and that’s not surprising or interesting,” Levine says.

In the trailer below, we can certainly see that Elizabeth is much different. She’s older, smoking a cigarette, and seductive. We also see that Booker DeWitt is a private investigator in Rapture, the doomed city of the sea from the first Bioshock. From the trailer, it seems that DeWitt does not know that Elizabeth is his daughter, which leads to speculation on how this story could fit into the overall narrative of the game’s universe. The game will feature exploration, combat, investigation – and if hints from Levine are to be taken – a section where the player gets to play as Elizabeth.

The story will come in two parts, with the first releasing this year for $14.99. Season Pass holders will be getting both parts as part of their purchase.