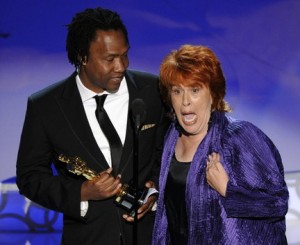 Yup, not crazy at all.

The Oscars got their very own Kanye West moment in little ole Elinore Burkett, producer of Music By Prudence, last night.  Her documentary Music By Prudence was the winner of the Best Short Documentary, and apparently there is some bad blood between her and director Roger Ross Williams.

This is what she told Salon.com

“What happened was, the director and I had a bad difference over the direction of the film that resulted in a lawsuit that has settled amicably out of court.

“But there have been all these events around the Oscars, and I wasn’t invited to any of them. And he’s not speaking to me. So we weren’t even able to discuss ahead of the time who would be the one person allowed to speak if we won.

“And then, as I’m sure you saw, when we won, he raced up there to accept the award. And his mother took her cane and blocked me, so I couldn’t get up there very fast.”

Director Roger Ross Williams had this to say:

Only one person is allowed to accept the award. I was the director, and she was removed from the project nearly a year ago, but she was able to still qualify as a producer on the project, and be an official nominee. But she was very angry — she actually removed herself from the project – because she wanted more creative control.

I don’t know what they told her. The academy is very clear that only one person can speak. I own the film. She has no claim whatsoever. She has nothing to do with the movie. She just ambushed me. I was sort of in shock.

On the claim that she told him about the premise for the  film:

No, not at all. The truth is that she saw the band perform [in Zimbabwe], and told me about that, and then I opened up a dialogue with the [King George VI School & Centre for Children with Physical Disabilities] school and went on my own – which you would’ve heard about in my speech — and spent $6,000 going to Africa shooting myself. And when people expressed interest in the film, I asked her to come on board. And then I regretted that decision. Then she sued.

Honestly, it sounds like both parties are a bit crazy. Although the ranting and raving she did last night during her speech make me think she is a bit more on the crazy side. Hey, at least it makes for a good highlight reel, right?