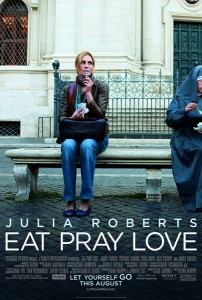 Julia Robert’s latest film, “Eat Pray Love,” is adapted from a best selling novel of the same name. While falling asleep when reading is usually considered acceptable with a book, it isn’t exactly the affect you want your movie to have on the audience. Unfortunately, this is that type of movie.

Liz Gilbert (Julia Roberts) is a writer, world traveler, and unhappy person. Her year old marriage to her husband Stephen (Billy Crudup) is failing, and is keeping her from doing the things that she wants to do. In tears one night, she prays to God and asks for a sign. When she climbs into bed, Stephen tells her that he doesn’t want to travel with her on her next business trip. To that, she replies “I don’t want to be married.” With that, Liz sets off to find herself.

The film follows Liz’s journey around the world, meeting people and experiencing new things. Shortly after leaving her husband, she meets a young actor in New York named David (James Franco) who she quickly falls in lust love with. After some arguments, and their relationship falling apart in a similar fashion to heir marriage, Liz leaves that relationship and travels to Italy (Hint: this is where the “EAT” comes in). There she meets some friends, eats Italian cuisine, and learns the language. When she is finished there, she travels to India to find her spiritual side (“PRAY”). Finally Liz it makes it to Bali, where she meets a Brazilian man named Felipe (Javier Bardem). I don’t dare give away what happens here, but you can probably guess (“LOVE”).

I wish that “Eat Pray Love” was as simple, and quick as the summary above. But the problem is that the movie is simply uninteresting, and far too long. At a running time of 133 minutes, the film starts to drag early on. It is generally not a good thing when you are bored during the “EAT” part of the movie, and you know that “PRAY” and “LOVE” is still a ways off. First of all, it is hard to connect with characters that are successful, and throw their lives away in order to find some kind of missing feeling. In real life, people don’t just throw away their responsibilities, leave their jobs and marriages, and just go on a spiritual journey. Liz honestly seems immature, and so it is hard to follow her on her journey and keep much interest. With that being said, the travels that she takes look like they would be fun if you were there, but literally nothing of much excitement happens during the entire movie. It is as exciting as watching a stranger take a vacation, and having nothing invested them or the trip. Basically, there is no conflict in the film except for what Liz creates for herself, and it is just boring and self-absorbed.

On the positive side of things, the movie was visually beautiful. Some of the best camera work is done during the “EAT” portion of the film in Italy, when Liz and her new friends are eating the local cuisine. The shots look great, and closeups are enough to make you hungry just watching them. But again, that only works so long when you are watching a film – and not a show on the Food Channel. The acting in the film is also good, so I can’t say that the performances are what made the film awful. But even with interesting characters like Richard from Texas (Richard Jenkins) and family man Felipe from Brazil (played extremely well by Javier Bardem, who has some sort of magical charm despite his lack of classic good looks) they just don’t add enough to make it more interesting. For those who read the novel, and could relate to Liz and her yearning to find something greater in her life, I think it must have worked much better on paper than it did on film. The fact that they could put the book down, and read each of the sections separately must have been a plus.

“Eat Pray Love” tries to be interesting and sophisticated, but unfortunately lands in the category of boring and uninteresting. With trouble connecting to the characters, and a lack of anything very interesting going on for over two hours, it is difficult to truly enjoy the journey that we are on. When you feel like the movie is almost over, and you are introduced to one of the main characters, there are problems. My best suggestion, if you see the film, is to catch an early show. Otherwise, you may want to wait until it comes out on DVD so that you can watch it before you fall asleep.

Another take by Blake:

Despite having everything, a good husband, a nice house, and a great career, Liz Gilbert isn’t happy. She keeps desperate desires to get away from life, and doesn’t seem to share the same interests with her husband anymore. So, she does what anyone would do in that situation, no not work on it, get a divorce and spend a year overseas trying to “find her word”.

There is no end to the pretension that is Eat, Pray, Love. For over two hours we are subjected to a character that is all at once bland, conceited, and a bit of a bitch. Julia Robert’s character, Liz Gilbert, wallows in self-pity throughout the majority of the film. It is really hard to feel sorry for someone, when they caused much of their own problems to begin with.  Characters prattle on about finding their “word”, and learning to forgive yourself, but ultimately it is just inane talk to keep a thin plot moving.

The biggest problem with Eat, Pray, Love is the fact that it is so self indulgent. It is hard to care about a character who has the ability to take a year off, and live in places like Rome and Bali, when she acts like her life is disastrous.  Julia Roberts as charming as she is in this film, cannot pull the characters from the depths of her ego.

The film parades itself as an intellectual answer to the basic romantic comedies that are highly targeted to women these days. Unfortunately, this shallow film is a wolf in sheep’s clothing. Its proverbs play more like empty words, and its self-realizations swim out into the audience who are too busy trying to keep their eyes open.  When you remove all the beautiful cinematography, and good actors you are left with a simplistic story that is forty-five minutes too long.

The only saving grace of the film is its cast. Julia Roberts shows exactly why she was Hollywood’s most bankable female star for years before she took a little break. Richard Jenkins gives probably the best performance, that doesn’t ring hollow. Javier Bardem tries to save the film towards the end with his charm, but his entrance is too little too late.

I may seem a bit harsh, but I feel like I just got done watching someone’s vacation slideshow. Despite the beautiful scenery and great people, I couldn’t really connect to the story behind it all. You might get a different experience, but for me this is strike two on Ryan Murphy’s directing career.