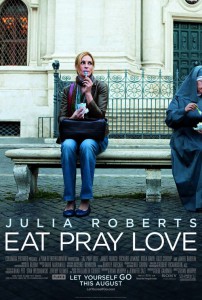 Eat Pray Love is a dull and poorly executed picture that meanders, is no where near as good as it thinks it is, and fails to engage or fill us with emotion almost every step of the way.

Liz Gilbert isn’t happy in life and when she decides she can’t take it any more she sets out on a globe trotting journey.  Leaving her ex-husband, new lover, and friends behind she will search for herself in Italy, India, and Bali.  And that is all I will really divulge plot wise as I just kind of want to get into this review and get it over with; kind of like how I felt about the film about an hour in.

I don’t want to sound too harsh because the movie isn’t an atrocity on filmmaking or anything; it is just so poorly executed and such a drag to get through that I can’t really say a whole lot of good things about it.  Let’s get the good out of the way, shall we?  Richard Jenkins is great, per usual, as a fellow American in India and he would have been a great asset for Liz to learn something. That is if she cared or took advice from anyone who cares about her.  Jenkins also gives the audience their only honest emotional reaction in the film as he tells a story about his character’s past.  The funny thing is that every other time in the film when we are supposed to react emotionally they cut to Roberts tearing up but in Jenkins scene it is one long take, just him and the camera; he is just marvelous.  I also enjoyed Javier Bardem a lot in the film because, well, I am jealous of his sexy swagger.  But he is great as always and will make the lady’s swoon.  Billy Crudup is also quite good in his limited time and he has the funniest moment of the movie in a little song he puts together.

You know a movie isn’t that great though when James Franco doesn’t even do anything for me.  And I love me some Franco!  Roberts feels like she is just playing herself here and I never once bought into her character.  It might be the characters fault though as she is not entirely likable as Liv is a tad pretentious and self centered; not someone to easily like and get behind.

Beyond a weak protaginist the direction of Ryan Murphy is surprisingly lifeless and completely uninteresting.  I mean, this is they guy who conceived Glee.  I don’t think everything he does has to be the same tone as his current hit, but that show is full of such life and character I was shocked that this film is so devoid of both of these things.  Beyond the film’s spirit, technically it has some real question marks as well.  The food is supposed to be shot to be mouth watering and delicious but I have seen food presented much better in many other movies.  Murphy’s use of music is oddly uninspired as well.  They double dip on a few artists while he also uses a few songs that have already been used to perfection in a couple other well known films.  And that is all I could think about during their respective scenes, “Wow, this song should never be used again because Boogie Nights owns it.”

But above all, the film doesn’t really sell me on anything it is trying to sell.  The film has an aura to it that thinks it is so much better and profound than it really is and the protagonist’s arc doesn’t really exist.  I don’t know what Liz learned or what she was really trying to achieve other than that you should blaze your own path.  But it’s funny that Liz’s path was mostly dictated by a, “small man that looks like Yoda,” as much as her own ambition.

In the end, Eat Pray Love is a hollow endeavor that felt like an endurance test to get through.  Running well over two hours you will be ready to go before the film even gets to its third act and from the reaction around me in the theater you are better off sticking to the book.  But if the film is an accurate representation of the book’s author then I wouldn’t want to get near that.  Can’t really recommend this and I have no idea who is going to really enjoy this surprisingly dull entry from Ryan Murphy and Julia Roberts.

Eat Pray Love is a D