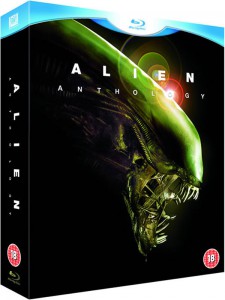 I love every film in this series.  For me, Aliens is by far the best.  It follows the stereotypical formula of sequels in horror films where the military becomes involved to take out the monster/ aliens.  It just feels very different while still keeping the same concept, and it works perfectly.  A lot of people have dislike for the third and fourth installments in this series.  While they are not better than the first two by any stretch, they are certainly better than the two Alien vs. Predator films.  I am sure these look beautiful in the Blu-ray format, and each disc comes with audio commentary, original trailers, and deleted scenes.

» Next: Back to the Future: 25th Anniversary Trilogy