It was announced last week that Geoff Johns is ending his 10 year run on Green Lantern.  DC’s The Source blog then revealed that ALL the Green Lantern titles were going to receive a creative face lift.  This morning, DC announced the new creative teams on the GL titles as well as a brand new title.

– This title will focus on Hal Jordan and his adventures.

– This one will probably feature John Stewart, Guy Gardner, Kilowog, and other members of The Corps.

– I’m thinking this one will feature the story of Kyle Rayner (my second favorite Green Lantern).

And the new title:

– Larfleeze is the Orange Lantern, and he seems to have garnered enough fans for his own book.  I don’t see this title making it a year.

The new 52 version of the Lantern books has been hit or miss.  The main book, while good for the most part, suffers from non stop crossovers with other Lantern titles.  The GL Corps title has had its ups and downs. Solid art, but it’s also suffering from crossover fatigue.  GL: The New Guardians was terrible to begin with but has really found some traction with artist Aaron Kuder. I’m sorry to see him leave the book.  I dropped Red Lanterns after the first issue, and I will not be picking up Larfleeze.

I’m most excited about the New Guardians creative duo.  Justin Jordan’s creator owned book, The Strange Talent of Luther Strode, was one of my favorite books to come out last year.  Combine that with Brad Walker’s killer art, and hopefully the book will continue the momentum it’s building right now.

Here’s a little piece of Brad’s work on Action Comics: 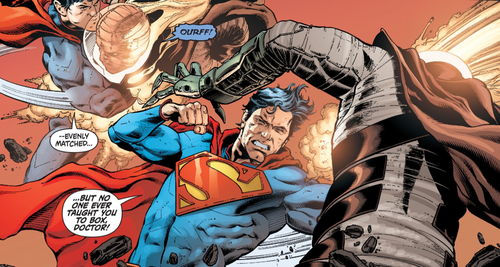 The other new teams don’t really instill me with a lot of confidence.  I feel like DC editorial is really dropping the ball on a lot of big titles.  I know the Scott Snyder/Jim Lee Man of Steel is around the corner, but losing Geoff Johns on a main book like Green Lantern is going to be a major blow.  I guess we will have to see how this plays out.