Your dedicated reviewer continued her U2 trek with shows in St. Louis and Pittsburgh. After 110 shows, the band’s “360 tour” will conclude Saturday, July 30, in Moncton, NB (Canada) at the Magnetic Hill Music Festival. Learn more at u2.com. Read our review for U2 in Chicago here.

I’ve been to a million U2 shows. Ok, more like 23 or so. Still, I’ve gotten to the point where I know what I’m going to get from the band. A light show. A strange stage with moving bits. A plea for world peace and assistance for third-world countries. Anthems for the righteous. Someone pulled up onto the stage to dance or play guitar. Rock star poses. You know, the usual. 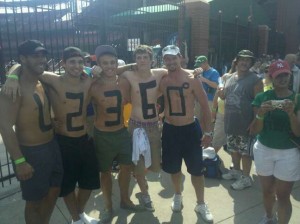 I normally hate shirtless guys in public, but I'll make an exception here.

If you’re a follower, U2’s show has been particularly predictable during its latest tour, “360,” which has been plugging away since summer of ’09. Oh, sure, there have been variations, especially for each tour leg and in certain cities. But a major tour that holds the world record for having the largest stage structure and has light and stage choreography timed to the millisecond just doesn’t have much wiggle room for spontaneity in the setlist. That isn’t necessarily bad, nor does it mean the tour is boring – far from it, as the spectacle is quite grand! But it does make it difficult to review the show from city to city.

Thus, if you want my thoughts on the basic setlist and general “wow factor” for U2’s St. Louis and Pittsburgh shows, you’ll have to read my review of this year’s concert in Chicago. Seriously, the setlists and theatrics were almost identical. But for those nuggets of awesomesauce, those moments that were unique to each city, read on. 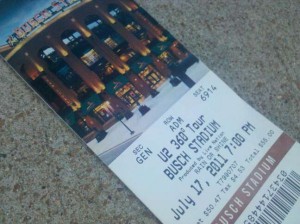 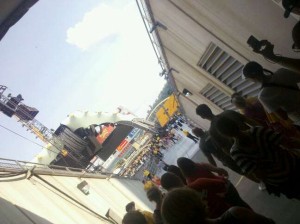 Entering football heaven only to find a giant spider in the way.