How To: Survive the U2 General Admission Line

How close will you be to the awesomeness?

No, I’m sorry, U2 general admission ticket holders – you cannot waltz into St. Louis’ Busch Stadium at 7 p.m. this Sunday and expect to find a great spot on the floor. What’s that? You had no idea that you’d have to fight 10,000 people for a decent spot? Fine, fine. I, as a veteran of about 20 U2 shows and a generally lovely person, will give you pointers to help you survive your GA experience without wanting to throw Bono’s doppleganger into the Mississippi.

Get familiar with Busch Stadium’s rules. There’s a special U2 page on the St. Louis Cardinals’ website about what you can and cannot bring to the line and to the stadium. Read and understand all of this thoroughly. Don’t be the jerk holding up the line, arguing with security when they try to confiscate your giant camera lens.

Get the lay of the land. Or the lay of the “claw.” Look at Busch Stadium maps for gate numbers, restrooms and concessions. Check out info about U2’s stages and the “claw” structure and figure out where the setup is in relation to the Busch Stadium stuff you’ve already reviewed. Find maps of downtown St. Louis so you know where Metrolink stops, parking garages, grocery and convenience stores and public restrooms are. And if you want to be uber-prepared, read my review of last week’s Chicago show. Knowledge is power, and if you’re familiar with this stuff in advance, you can made good decisions about places to stand once you’re inside the stadium. 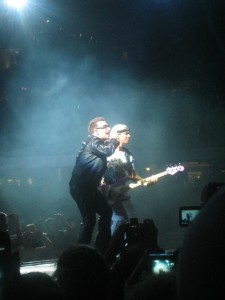 If you nab a decent spot on the floor, these guys might fling sweat on you. Lucky!

The GA line forms at 7 a.m. at Gate 5 on Clark Street. Fans were allowed to camp out at some venues on previous U2 tours, but this year, most venues are nixing that. If you want a spot in the inner circle or a primo position on the center rail of the outer circle, get there no later than 10 a.m. A local news station reported Saturday morning that some fans were already at the stadium giving out numbered line tickets, presumably so people would have their places in line held while they went off and did whatever before the show on Sunday. But fan-written tickets mean nothing, and I’ve confirmed with Busch Stadium officials by phone and in person that those with fan-provided numbers will have no greater chance at a spot at the front of the GA line than those who do not. The only way to get to the front of the line is to be there early.

Decide to park or ride Metro immediately. Both have pros and cons. With parking, you’ll pay out the wazoo but will have a place to stash fold-up chairs and coolers; then again, you may have to hoof it several blocks, depending on which garages and lots are available. With Metro (bus or light rail), you’ll wait in line with a huge crowd of drunk, sweaty people at a platform or bus stop after the show, but you can travel lightly and avoid parking costs and traffic. Personally, I prefer public transit and am gearing my suggestions in this post to carrying as little as possible. Your mileage may vary, of course.

Make peace with disposables for one day. I know it’s not very green, but you won’t want to hold a heavy bag of junk when you’re jumping around and cheering for The Edge. Instead, plan on throwing a ton of stuff away. In a paper or plastic grocery bag, bring the following things for a bit of comfort: a towel from the dollar store (to protect your bum on the hard sidewalk); magazines, catalogues and junk mail (to read); cheap playing cards (to prevent boredom and crown you as GA party royalty); and inexpensive flip-flops (to wear only in line instead of the sweaty sneakers you should bring for the actual show- apply sunblock to your feet!). Throw all of this stuff away when security begins shoring up the line in the late afternoon (usually around 3 or 4 p.m.).

Don’t dress for the fashion runway. Seriously, light sandals or fancy clothes will make you miserable after 15 hours in line and at the show. Remember that you’ll be sitting on dirt or concrete and then jumping around on aluminum floor thingy. Wear good sneakers and lightweight, loose clothing that can breathe and that you won’t mind getting sweaty and dirty. And ladies, leave the giant purses or tiny clutches at home. You’ll want to be able to wave your hands like you just don’t care, so get a light, tiny messenger bag for the essentials: ID, credit card, cash, lipbalm with sunscreen and tickets. You’ll likely even have room for a shirt from the merch table if you fold it properly.

Be a technophobe. Leave the MP3 players, tablets and handheld video games at home. They’re cumbersome and will weigh you down, and they might break or be stolen.

Bring a camera and batteries. This is an exception to the no-electronics advice I just gave you. You likely will use much of your cellphone juice to prevent boredom in line, so you might not have enough power to take photos or tweet during both Interpol’s and U2’s sets with your phone. Bring a light pocket camera with extra batteries with you for the show, or make sure you have a spare cellphone battery.

Beware of the sun. Busch Stadium doesn’t have many shady areas around it, so be prepared to bake. Before you leave your house, apply a quality sunscreen and let it soak into your skin for about 10 minutes; tote that half-empty bottle of sunscreen with you to apply later in line and then toss the bottle. Bring a verrrrrry cheap umbrella or parasol with you to help block the rays until you can pitch it as you head into the stadium. Wear a lightweight hat with a wide brim (Bust out those Derby hats, ladies!).

Don’t go hungry. Eat a hearty breakfast before leaving home. Bring small yet filling snacks with you to nibble throughout the day, such as energy/protein/meal bars, granola bars and nuts. You can grab concession-stand food for dinner once you’re inside the stadium (More on that later.). Bring water with you, but know that 1) your water eventually will get warm without a cooler, 2) you will have to decide to throw away your cooler or take it to your car before the show (See info above about parking), and 3) you may have to pee.

Make friends. Most U2 fans are used to the GA experience and love taking new concertgoers under their wings. Don’t be afraid to strike up conversations with those around you. Simply asking someone about their favorite U2 song, how many shows they’ve attended or what else they’re checking out in St. Louis will help forge a connection and make them more likely that they’ll hold your spot if you leave the line to use the restroom or to your car. People travel from around the world to see U2 shows, so remember that you’ll meet interesting people who may offer you a friend or a place to stay for a future show.

Don’t abuse privileges. Even though U2 fans are friendly, they’re also people who generally abide by a common code of decency. If someone kindly offers to hold your spot while you fetch food, be a nice person and ask if they would like anything. Make sure you return to the line within an hour. And even if you happen to be in line at 7 a.m., it’s not cool to let your friends jump into line with you at 4 p.m. as you’re preparing to head into the stadium. Most people are ok if you welcome your friends to the line up to an hour after you arrive, but don’t push it. Don’t be that jerk – it’s rude, and you’ll be booed and possibly thrown out.

Listen to the security guys. They’ve been really helpful at most of my other shows. They’ll make a number of important announcements about procedures and restrooms, especially around the beginning of your time in line, around noon, and leading up to herding everyone inside the stadium, which often happens between 3 and 5 p.m.

Know the entrance procedure. It varies from venue to venue, but it usually goes something like this: Get rid of your belongings around 3 p.m.. Tighten up the line around 4 p.m. Enter about 100 people at a time at 5 p.m. Get a general floor wristband. Get an inner circle wristband (if you’re among the first 700-1000 in line, usually). Walk through the bowels of the stadium. Walk onto the field and claim your spot.

Don’t give into temptation. You’ll want to pee, eat, buy stuff and generally relax, but don’t do it! Ignore that first merch table and nachos stand! Go get your spot first! Lots of exclamation points on this one, because the good spots will fill up quickly! Once you claim your piece of turf, have your friend (or, if you came alone, a new U2 line buddy) hold your spot by “being big,” as I like to say – they should spread their legs out and stand with their hands on their hips cheerleader-style, or plop right down on the floor and stretch out their legs to save enough room for you. Quickly use the restroom, buy your commemorative t-shirt (that proves you were there, that you heard of them first*), get your chicken fingers and head back down to the field so that you can save your buddy’s spot as he or she heads out to do the same.

Choose concessions wisely. I’ve learned from experience that downing a cheese pizza while sitting on hot aluminum and then jumping around in 100-degree heat isn’t the best idea. I know you’ll probably be starving, but try to find something that won’t be heavy in your tummy – lightly salted fries or *gulp* a salad honestly will do you well. And remember that although it’s necessary to stay hydrated, your bladder will yell at you. Remember our rule about determining how much liquid you can handle? I personally don’t move from my spot from the time I fetch food to the time Bono blows kisses to the audience, but I’ve got a bladder of steel.

Know what the inner circle is. You’ll learn from your research that U2 uses a main stage, an outer circle runway and moving bridges from the main stage to the runway. In front of the main stage is the inner circle, where the first 700-1000 fans (give or take, depending on venue) with special wristbands get the choice to enter. Like anything, there are pros and cons to being in the inner circle. Pros include having more space to jump and dance, being able to leave and return through a special entrance (facilitating restroom and food breaks) and being close to the main stage. Cons include needing to get into line very early, seeing band members’ backs as they prance the runway (which happens quite often), splitting time between watching whomever is on the runway and whomever is left on the stage, and not being able to take in the entire spectacle in one swoop. Decide before you enter the stadium if the inner circle is something you want.

Have fun! Unless someone is forcing you to see U2, you obviously want to be there. Enjoy the weird spectacle that is the 360 tour, and look up from your phone periodically to savor the experience.