Another Take By Zac: Film Review: Winnie the Pooh 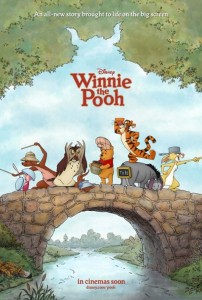 Winnie the Pooh is an incredibly sweet and charming reboot of the classic series that is full of some great songs, by the cast and She & Him, and some beautiful animation.

This telling of Pooh is a throwback of sorts, aiming to recreate the look and feel of the original animated works by the studio and not overwhelm the classic tales with newer animation styles and techniques.  The story, and film, is to the point and doesn’t over complicate things making it ideal for younger audiences to sit back and enjoy Pooh’s adventure.  The story mostly revolves around the search for Eeyore’s tail while Pooh tries to satisfy his grumbly tummy.  There is a wrench thrown in there as well when the threat of a Backson falls upon the Hundred Acre Wood.  As an added bonus, the film’s musical elements are bound to suck in the attention of the little ones as well.

But the film is not just for kids.  I enjoyed the film whole heartedly and was grinning ear to ear for most of the film’s runtime.  From the hilarious animation and sound effect of Pooh’s hungry tummy (brilliantly paired with a song to boot), Zooey Deschanel’s swooning vocals, and the charming sense of humor on display, the film is a delight for all ages.  The film is great to enjoy on a surface level but it can also be a lot of fun dissecting the characters’ personalities from a psycho analytical level as well.  Pooh’s drug fiend desire for honey and Eeyore’s suicidal depression in particular.

The film is finely paced, and brief, with a running time a hair over an hour; that’s including the very cute and enjoyable short film about Nessie as well.  Some might cry foul over such a short runtime but remember this is a film for kids with no attention span and the filmmakers do a fine job of making the most of every moment along the way.  The film almost serves as a time machine, making you feel like a kid again from the instant Christopher Robin’s door opens to reveal the “real life” versions of Pooh and friends in his bedroom.

The film’s animation style is classically beautiful and I can’t wait to own it on hi-def.  The film branches away from it’s classic look only for a fluorescent chalk sequence and a CG aided honey dream that, like Princess and the Frog and Kung Fu Panda, offers a nice change of pace to keep the look diverse and interesting.  The film also brilliantly institutes the text of the storybook into being a part of the film, making the film almost a living story book up on the screen.  In fact, I would love to see some sort of interactive Pooh story books for tablets that have Pooh wandering all over the paragraphs and in and out of pages; get on that Disney interactive.

The voice cast is also quite good from top to bottom with Jim Cummings doing a great turn as both Pooh and Tigger.  John Cleese provides a fun and interactive voice to the narrator who is wonderfully integrated into the story.  Craig Ferguson also shines as Owl, providing the perfect balance of arrogance and dimness to keep the character lovable and laughable.  Bud Luckey’s Eeyore is appropriately depressed and wallowing, and the animators match him wonderfully.  Travis Oates’ Pigglet is also wonderfully realized with his nervousness and blind faith put to hilarious effect.

In the end, Winnie the Pooh is the surprise of the summer for me and I can’t wait to revisit the Hundred Acre Wood with these guys.  Sweet, innocent, and full of charm I could watch this film again and again, smiling ear to ear.  The soundtrack is in regular rotation right now and I am sure it will be for you once you get a listen.  Young or old, this film has a lot to love and I can’t recommend it more whole heartedly.

Winnie the Pooh is an A-