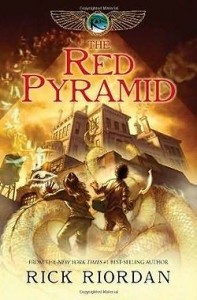 Rick Riordan is an author of young adult novels. He is better known for the Percy Jackson series, which follows a boy and the gods and goddesses of Greek Mythology.  Riordan’s love of mythology has led to two other series: The Heroes of Olympus (which focuses of Greek and Roman mythology) and The Kane Chronicles (which focuses on Egyptian mythology).  The Red Pyramid is the first book in the Kane Chronicles.

The Red Pyramid focuses on the lives of siblings, Carter and Sadie Kane. Carter and Sadie’s mother died when they were younger. As a result, Sadie is sent to live with her grandparents while Carter travels the world with his archaeologist father, Julius. They only see each other twice a year, when their father gets visitation with Sadie.

It is Christmas Eve, when Julius goes to pick up Sadie for a visitation. Except this one is a little different, he takes them to a museum to see Egyptian artifacts. Well, one in particular, the Rosetta Stone.  While there, Julius performs a ritual that releases a chaos god named Set.  Set locks Julius into a golden casket and buries it. All of this happens in front of Carter and Sadie, who have no idea what is going on.

The release of Set sends Carter and Sadie on the run as they find their lives in danger over and over. Not only is Set sending other Egyptian gods and demons after them, but an organization called the House of Life (which is a bunch of magicians whose goal is to keep the gods in check) is after the Kane siblings. The House of Life believe Carter and Sadie are godlings (mortals who are housing the spirits of a god) and think they should be destroyed.

Carter and Sadie are helped along the way by their uncle, Amos, and a protector, Bast (goddess of cats). They also learn they are magicians and must get their powers under control to figure out a way to stop Set from destroying the world and save their father. All of this must be done before Set’s birthday, which occurs in four days.

I am a HUGE fan of Rick Riordan. Not only are his novels super easy to follow, but the stories themselves are extremely fascinating. My favorite class in high school was mythology and I always thought I missed my calling as an archaeologist. I love Egyptian mythology the best, so this book was super fun for me to read. After being out of high school for so long (sssh don’t ask how long), it was nice to read a novel that reminded me of the different gods. It makes me want to hop on a plane to Egypt to see the pyramids.

The Red Pyramid is an A.