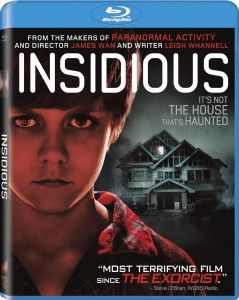 A suburban family moves into a new house only to find that it is haunted. When spooky events begin happening and their son falls into a coma, the family hightails it out of there and into a new home. Unfortunately for them that’s just the beginning of their haunting troubles.

It’s fairly rare these days to find a horror movie that relies more on atmosphere than on buckets of blood and guts to get its scares. It seems INSIDIOUS was trying to break the mold. I find this interesting considering the movie is brought to us by the director and writers that started the SAW franchise. If ever there were two polar opposite movies in a genre it would be these two. Here we have a film that stuck to basics and really ditched the buckets of blood & gore angle and instead focused on its atmosphere and timing. The style and theme reminded me a lot of DRAG ME TO HELL and the spooky atmosphere and poltergeist scares really brought me back to PARANORMAL ACTIVITY. In fact, this will feel A LOT like PARANORMAL ACTIVITY to many of you. Everything from the demon angle to the priest to the spooky poltergeist shenanigans were pages taken right out of the PARANORMAL ACTIVITY book. None of this is terribly surprising considering Oren Peli, who directed PA, is the producer of this movie. Rather than relying on imagination, the ghouls and spooks are right out in the open for us to see. I find that to be quite a bit less scary than movies that don’t put the monster out there very much or even not at all. By the end, I wasn’t terribly disturbed. At times it felt more like a walk-through of a horror wax museum than whatever horrid things you can conjure up in your own mind. That’s not to say it wasn’t still without its scares. INSIDIOUS does an outstanding job of conveying a general sense of dread and anxiety. I just think that could have been achieved without showing so much of the baddies.

The movie plods along in the beginning, but once it picks up steam, it is non-stop. I really dug the first act which felt like a classic haunted house movie. I even had a blast through the possession portion. I think if INSIDIOUS loses anyone it’s going to be in the third act: the full blown monster movie portion. I will give it credit for taking a different perspective in the latter portion than any other movie I have seen.

The acting here is surprisingly competent for a horror movie. Patrick Wilson and Rose Byrne seemed to have a natural chemistry with each other that really made their feelings and reactions seem genuine. Casting child actors can be a tricky thing and has always been very hit or miss in my book. Luckily the kids here do a fine job.

Picture: 2.40:1 in 1080p HD with AVC encoding. The picture is crisp. A lot of color was taken out of the movie to give it a cold, dark feeling. For being such a dark movie it looks remarkable. The colors that are present are very deep and stand out exceptionally well against the bleak backdrop.

Sound: 5.1 DTS HD Master Audio. This movie relies almost as much on the score as it does the visuals to really create the atmosphere, so it makes sense that the audio is top notch. One complaint I have is when it’s loud, it’s LOUD. I found myself adjusting my volume between people talking and suddenly screeches in the score.

Extras: Insidious Entities (6:32) – This piece dives into the different ghouls and demons in the movie. I kept thinking that the main demon in the movie looked an awful lot like Darth Maul from STAR WARS EPISODE 1: THE PHANTOM MENACE. In an odd turn of events, the writer was discussing how the film’s composer played the main demon and said it’d be like if, “Darth Vader were played by John Williams.” Maybe I am just making false connections though. Horror 101: The Exclusive Seminar (10:27) – This is basically the director and writer’s take on the history of horror and how they meshed those elements into this film. It’s a quick watch and somewhat interesting. On Set With Insidious (8:15) – This is a short behind the scenes feature. It really doesn’t bring much to the table.

And that’s it. It’s pretty bone dry in the extras department. It’s actually very disappointing if you’re a person that values the extras with your movies. There isn’t even a commentary track.

Is it worth it?

If you’re worried about the extras I would skip buying this and just get right down to renting it. The movie will definitely offer something to fans of horror and thrillers alike. Whether or not you feel the movie switches too many gears is up to you. I think Wan handled the transitions very nicely and I would certainly recommend it. Since it is PG-13 and practically an empty bucket in the blood department, I would say this is a good flick for people that like horror but don’t have the stomach for most of it. In case it seems like this might not offer enough scares for you I’ll leave you with this: I had to pee in the middle of the movie. Did I turn all of the lights on before I went down the hallway? Yes. Did I make my cat come with me? Sadly, yes. The atmosphere alone is worth the price of admission.