When it comes to baseball, I’m typically a traditionalist.

I truly believe I was born in the wrong era. I would have loved to have grown up in the 1940’s (well, minus that ginormous little thing called World War II) and seen some of the game’s legends in their prime. I would have loved the chance to see baseball played in the hallowed Polo Grounds. I wish I could have seen Sportsman’s Park/Busch I before it was replaced in 1966. I would have paid exorbitant money to take in a game at Ebbets Field, which I consider baseball’s premier cathedral (well, a small one, but a cathedral nonetheless). I abhor the designated hitter rule and wish baseball would return to a 154 game schedule.

For this, it surprises my friends that I’m in favor of instant replay in baseball.

For many baseball enthusiasts, a game relatively free of instant replay is perhaps the last vestige of tradition that the game holds on to. These critics argue that baseball is already too slow/boring compared to other sports, regardless of the fact that the average baseball game has more action than a football game. An umpire retains the “human” element of the game, permitting the fact that mistakes will be made, but such as it has been a part of the game for so long, it throws a wrinkle into the game that might not otherwise be present.

I respect and love the past generations of baseball players/fans. I’m sure many of them would be adamantly opposed to replay, as the fear of technology overtaking our lives seems to be more present to these fans.

I also completely disagree with them. 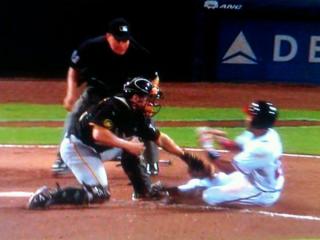 In the wake of Tuesday night’s 19-inning game between the Atlanta Braves and the Pittsburgh Pirates, the call for instant replay was revived when Jerry Meals appeared to have erroneously called Julio Lugo safe at home, ending the game in the bottom of the 19th in victory for Atlanta. Replays showed Lugo was tagged out by Pirates catcher Mike McKenry, and the next day MLB and Meals himself admitted that he made the wrong call.

Our own Cardinals were subject to replay controversy that day when Albert Pujols’ first-inning home run against the Astros may or may not have gone over the wall. Since home runs are the one play that can currently be reviewed, the umpiring crew reviewed the play and deemed that it hit the concrete barrier behind the wall.

At any rate, Pittsburgh players and fans alike erupted at Meals’ call. This isn’t necessarily a bad thing; it’s passion for the game and one’s team that allows the sport to thrive. Meals, though, in dealing with the aftermath has been receiving death threats, as has his family, an act that even the most reasonable ardent fan can agree is completely out of line.

Had replay been permitted to be used, perhaps the play would have been overturned and the game played to its conclusion. Perhaps the umpires would have agreed Meals made the correct call and upheld the play. The purpose of instant replay is to ensure the accuracy of the call.

Football, hockey, and basketball all use instant replay. When a challenge is issued in football, it’s an annoyance, sure. Most fans, however, are more concerned with getting the proper call than adding on a few minutes to the game. Officials would like nothing more than to be 100% correct and for the most part invisible in doing their job; this is simply a tool to help them get their job done.

Technology, if overused, could end up ruining the game. I don’t see too many people complaining, however, about the fact that artificial light allows games to be played at night, giving fans who work a better chance to attend games or watch it on tv and unwind in the evening. Naturally, Cubs fans might disagree, as Wrigley was the last field to install lights, but…well, it’s the friggin’ Cubs. Cubs fans clamor for a return to early 20th century baseball, to a time when Cubs baseball wasn’t an antonym of the word “winning.”

Take a tour of a major league stadium next time you get a chance. Walk into the clubhouse. The place is more luxurious than a resort. Flat screen televisions, pre-game buffets, state-of-the-art workout facilities, laptops to watch game film, wi-fi, air conditioning…you want a return to “traditional” baseball, take these amenities away. Ask an old ballplayer like Stan Musial and see if he would have liked to have air conditioning in the clubhouse and dugout. How many of them yearn for the day of pre-polyester uniforms?

Professional (and amateur) athletes use technology as much as they can to prepare and to play. From hiring nutritionists to using technology to maximize their workouts, today’s game is quite a bit different than the one played in years past. They watch hours and hours of past games/at-bats to study their opponents and their own performance. How about the advent of Gatorade in the 1960’s? How many people outside of the medical world knew what an electrolyte was? Athletes have used the Nike Maxsight contact lenses, which give vision an amber tint and purportedly allow better vision on the field.

There are ways to ensure the sanctity of the game is not compromised. Each team could be limited in the number of challenges allowed per game. Balls and strikes, by far the most common call during the game, would be exempt from challenges, as would check swings. Umpires do present a necessary element to the game that doesn’t necessarily show up in the scorebook: halting confrontations and breaking up mound visits that take too long; dusting off the plate when a catcher gets dinged up by a foul ball/bad pitch to give him time to shake it off. Little things like these that few people notice or appreciate are things that fill in the intricacies of the game.

Like the designated hitter rule, instant replay is an element of the game that will inevitably be expanded (the National League is one of the last remaining leagues in the world that doesn’t use it; even their minor league affiliates utilize it); unlike the DH, though, I believe that instant replay can be a beneficial tool to be utilized.

We’ve given players as many tools as necessary to up their game short of illegal, performance enhancing drugs (well, they’re outlawed anyways). Why wouldn’t we want to give umpires the proper tools to do their jobs as well as they can? Ask Jerry Meals if he’d like to have that one back. Ask Jim Joyce, Don Denkinger, etc. The Olympics don’t rely on a guy standing at the finish line to say, “I think this guy won.” Let the players be the human element of the game.