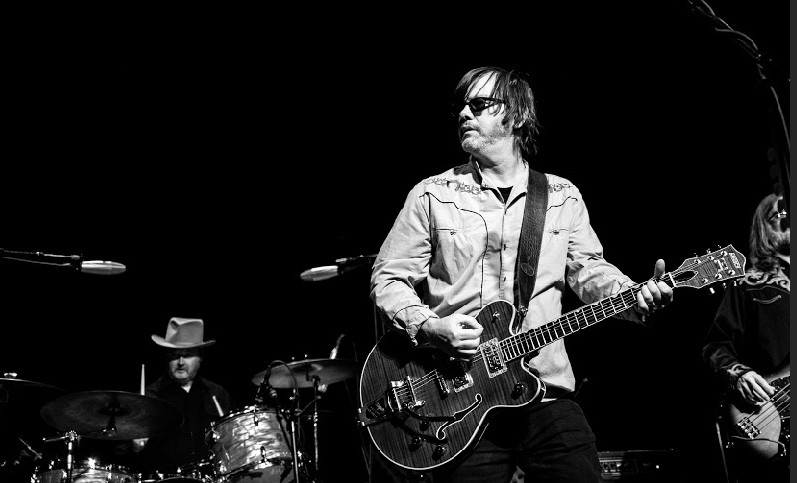 By Carla Scuzzo
A sellout crowd welcomed Son Volt to Delmar Hall on Saturday night, November 23rd. Jay Farrar was in typical form – quiet and rather sullen. His musical style has not changed much over the years. He continues to preach his religion of political and personal inequities. While he is not generous with chat or with smiles, his songwriting remains steadfast if not somewhat repetitive.

Farrar reaches those that feel disenfranchised with songs that speak to “The 99,” referring to the 99% of us that fall outside the wealthy 1%. He also touches on immigration issues, whistleblowers, reality-show presidents, troubles and turmoils. He is a intense-feeling songwriter that touches his following deeply.

A heavy-hitting encore had Farrar and his current Son Volt lineup revisit some of the material that earned fans’ respect back in the day when Son Voltwas just a baby – and even a couple back from the Uncle Tupelo days, including “Chicamauga” and “Still Be Around.”

It’s rare that this writer is bowled over by the opener – so much that it seemed a hard act for Son Volt to follow. Old Salt Union was that band. With wild and contagious energy, locals Old Salt blew the doors off of Delmar Hall – people stayed on their feet for throughout the venue, dancing, bobbing, and singing along. After seeing them, you might call them bluegrass, newgrass, rock and roll, indie, or a combination of all, but you’ll be leaving glad you heard them.

Led by Jesse Farrar, the band is more than the sum of its parts, recalling Mumford and Sons when they were fresh and new. The name Farrar is no coincidence. When guitarist Dustin Eiskant introduced him he claimed it was just that – a coincidence. It was a joke – Jesse’s uncle is none other than Jay Farrar. And Dustin himself is Jesse’s cousin. If it’s all in the family, Uncle Jay could borrow a few pages from Jesse’s book. Son Voltalmost seemed a let down after Old Salt Union’s explosive set.

Back Against the Wall

(Tom Petty and the Heartbreakers cover)