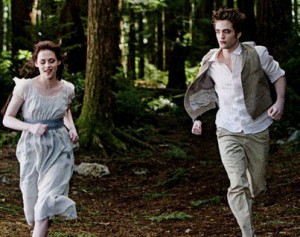 Seriously? No one thought this was a little stupid looking?

I may not have enjoyed New Moon, but I do like director Chris Weitz, despite what you might think he is a man who puts thoughts into his adaptations. There is many things across the internet detailing just how badly he was screwed by the studio in his Golden Compass adaptation. Although, I will never be able to think of him with a straight face after the amazingly awkward Chuck & Buck.

I do respect the fact that he is willing to admit his mistakes. Anyone who saw New Moon in theaters can attest that the moment Michael Sheen’s Aro stares into the eyes of Ashley Greene’s Alice and glimpses the frolicking future of Edward and Bella, people cracked up in laughter. Well, Weitz has noted on the DVD commentary, that what happened in that scene wasn’t exactly what they were going for.

“I think it could have been less than an Arcadian fairy tale running through the foresty movement and more of an abstract at Kristen flash on her face,” Weitz said. “That would have avoided laughter, which wasn’t only heard at the premiere where there are cynics and jaded Hollywood types, but the most packed fan screenings.”

It might interest fans to know that Weitz was on the verge of quitting his film career until he got the offer to work on New Moon. So, even as much trash as I give the series, it is nice to see it revitalize someone’s career.