NBC Hands Out Renewals for “Community”, “The Office”, and “30 Rock”

After recently renewing Parks and Recreation it came as no surprise to anyone that NBC quickly renewed the rest of its Thursday night comedy line up. The three shows are freshman comedy show Community starring Joel McHale, critical darling 30 Rock, and NBC’s only ratings king The Office.

Despite some average to low numbers on some of these shows, NBC has opted to keep them around for another season. Most likely due to the fact that all their original content shows seem to be struggling, and these are some of the stronger shows in the pack.  I would expect NBC’s Chuck to be back for a fourth season as well. The ratings for the spy comedy has stayed pretty steady, and they are getting close to be able to sell the show into syndication. No use in putting this much investment into a series without seeing much a return. They stand to make much more money in the long run by keeping it.

Here is the full press release: 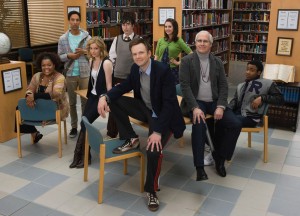 The announcement was made by Angela Bromstad, President, Primetime Entertainment, NBC and Universal Media Studios.

“We are happy to give these early pickups to these critically acclaimed, incredibly funny comedies,” said Bromstad. “As a result, we look forward to continuing our rewarding partnership with the respective creative teams and talented show-runners for ‘30 Rock,’ ‘The Office’ and ‘Community’ as they all consistently deliver quality shows.”

First-year comedy “Community” is averaging a 2.7 rating, 7 share in adults 18-49 and 5.9 million viewers overall so far this season, with “Community” originals winning the time period among adults 18-34 and men 18-34. Since moving to the Thursday 8-8:30 p.m. (ET) half-hour on October 8, “Community” has improved the time period by 24 percent versus NBC’s adult 18-49 average earlier in the season.

Currently in its fourth season, “30 Rock” is averaging a 3.4 rating, 8 share in adults 18-49 and 6.9 million viewers overall, with “30 Rock” originals winning the time period among men 18-34 and men 18-49 despite airing opposite the concluding half-hours of ABC’s “Grey’s Anatomy” and CBS’s “CSI.” “30 Rock” is the most upscale comedy on broadcast primetime television when ranked by its concentration of homes with $100,000-plus incomes in its adult 18-49 audience.

“The Office” is the Emmy Award-winning comedy series from Deedle-Dee Productions, Reveille and Universal Media Studios. The show offers a hilarious documentary-style look into the humorous and sometimes poignant foolishness that plagues the world of 9-to-5 and is based on the award-winning BBC hit. Golden Globe winner and Emmy nominee Steve Carell (“Get Smart,” “Little Miss Sunshine”) stars as pompous regional manager Michael Scott..

“Parks and Recreation,” starring Amy Poehler (NBC’s “Saturday Night Live”), is a production of Deedle-Dee Productions and Universal Media Studios. Along with Greg Daniels (NBC’s “The Office”) and Michael Schur (“The Office”), Howard Klein and David Miner also serve as executive producers for the series.