He’s not exactly known for his defense. In fact, he ranks well below average according to the metrics.

Still, that hasn’t stopped him from making some pretty exceptional plays when it’s counted.

Known primarily as the best hitter in baseball with runners in scoring position the last two seasons, it’s easy to remember that Allen Craig hit the home run that ultimately proved to be the game-winner in Game 7 of the 2011 World Series. Conversely, it’s easy to forget the catch he made in the sixth inning to rob Nelson Cruz of a home run. 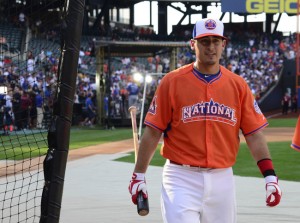 Well, in case anyone did forget about that grab, he quickly reminded them Sunday. After Edward Mujica allowed two runners in the top of the ninth while preserving a 3-2 lead, Jedd Gyorko lofted a fly ball to deep left field. Craig gauged the trajectory perfectly and made an excellent leaping grab, preventing at best a two-run extra base hit and at worst a three-run home run.

Oh, and in typical Allen Craig fashion, he came through with runners in scoring position, lacing an RBI single in the third inning and eventually scoring the deciding run on David Freese’s double. With that single, Craig has hit .412 in his last 17 games to go along with a .587 slugging percentage and 15 RBI, which puts him within one RBI of the NL lead. This combined with Yadier’s relative cold streak (he’s hitting .193 in his last ten games) has put him four percentage points behind Yadi for the lead in the NL batting race. Add Matt Carpenter’s .325 average and the Cardinals now own three of the top four averages in the NL. Not too shabby.

Still, it’s hard to imagine this team being anywhere near the level they are without Craig, the team’s eighth round pick in the 2006 draft. Craig’s now hitting a preposterous .484 with runners in scoring position this season. His power levels are still down (.156 isolated slugging), but at this point I don’t think you’ll find too many people who will complain.