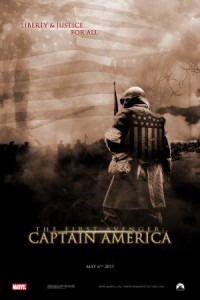 In pop culture, there are a few iconic symbols of all good things American.

Baseball. Football. Apple pie (even though it originated in England). Bald eagles.

Representing all of these symbols rolled into one idea incarnate, Captain America was a hero born in the fires of World War II. As the hero of the eponymous comic books, he is the final member of the Avengers not to feature in a film.

For the record, I’m not a ginormous comic book/superhero guy. Nothing against them. I don’t denigrate their fans, I just never got into them. I’ve seen most of the various superhero/comic films in recent years, but I didn’t go out of my way to see them. Having said that, I was pretty stoked to see this film, although not nearly as excited as my moviegoing companions, Mike, Chris, and Dan. Their love of Marvel and DC rivals that of my appreciation of baseball, so they were first on board to go with me.

Strangely, none of the girls I know wanted to see it.

The bulk of the film takes place in 1942. Johann Schmidt (Hugo Weaving) is an officer in the German army and the commander of HYDRA, portrayed in the film as the Nazi secret scientific research team. Schmidt is searching for the Cosmic Cube, an incredible source of energy that can also grant its wielder nearly unstoppable power. Once he finds it, he hands it over to his chief scientist, who manages to tap its power to utilize in weaponry.

On the other side of the Atlantic, Steve Rogers (Chris Evans, who used me as a body double in the last half of the film) portrays a short, physically weak individual who yearns for the chance to fight overseas, not for glory, but as part of his duty to his country. He watches in frustration as he’s continually passed over while others are selected, including his best friend Bucky (Sebastian Stan), who manages to join the infantry division Steve’s father served in. He is rejected five times before he is seen in his sixth attempt by Dr. Erskine (Stanley Tucci). Erskine, noting Rogers’ altruistic nature, passes Rogers through his physical and brings him into the Strategic Scientific Reserve, headed by Colonel Phillips (Tommy Lee Jones). After demonstrating his mental readiness, Rogers is brought to a secret laboratory, where they inject him with serum and vita-rays that max his body to the limits of human capability. Immediately after, however, a German spy shoots Dr. Erskine and attempts to steal some of the serum. He fails, but Erskine dies, taking the formula for the serum to the grave.

Rather than risk Rogers on the front line, the Army orders that he undergo physical testing to try to reverse-engineer the serum, but instead he embarks on a tour with the USO to sell war bonds and raise morale while wearing a patriotic uniform.

While overseas in Italy, he overhears soldiers in the 107th were captured and are being held behind enemy lines. Defying orders, he parachutes in behind enemy lines with the help of agent Peggy Carter (Hayley Atwell), an officer in the SSR, and Howard Stark (Dominic Cooper), a mechanical engineer working with the US Army and the father of future Avenger Tony Stark. The rescue of the prisoners (one of them being Bucky) is successful, but Rogers, now known as Captain America, discovers that Schmidt/Red Skull has built several factories throughout Europe to produce energy weapons for his HYDRA soldiers (think of the SS with shock rifles).

After the successful egress from the compound, Captain America recruits a small group of soldiers (who eventually become the Howling Commandos in the comics) to help him take down the factories. He enlists the help of Stark to design a new outfit and he finds his trademark shield, which not only protects him from kinetic missiles but can also be thrown as a weapon.

This is an action film, through and through. There aren’t really too many humorous moments in the film (providing a somewhat stark, if you will, contrast to the Iron Man franchise) but the tone isn’t exactly melancholy. This is a film that lets its action do the talking.

And boy, does it ring loud and clear. The acting isn’t really anything to write home about, nor should it be expected to be.

Did that sentence even make sense?

Evans does a good job of being absolutely ripped, but there aren’t really many moments that require intense acting. There isn’t really any chemistry between him and Atwood in the film to speak of, either. Jones’ scenes are somewhat scant, and he provides a little comic relief, but I don’t think he put his total heart into it. Perhaps he should have been pursuing a one-armed man.

Exiting the theater, I was pretty entertained, if a little underwhelmed. Mike, Chris, and Dan seemed to enjoy it, but they were a bit let down for different reasons, I think. Hardcore fans of the Avengers franchise (they explained a lot of the backstory to me), they were hoping for a little more.

As a straight-up adaptation of the comics, I think superfans might be a little disappointed.

As a tie-in to the upcoming film featuring all of the Avengers, it was a solid film that sets the stage, but doesn’t really leave the audience yearning for more.

As a straight-up action film, it’s an entertaining flick with terrific fight scenes that guys should take girls to as payback for having to go see their romcoms this summer.

At the screening we went to, there was no little trailer after the credits, as has been the custom in the other films (finding Thor’s hammer after the credits of Iron Man, for instance). We were pretty let down, as we stuck around to catch a sneak peek. I’ve been reading online, however, that there is a trailer. If you do go see the trailer, lemme know how if there is one and how it is.

Captain America: The First Avenger gets a B-.