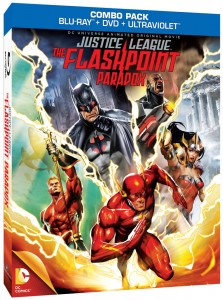 The DC Animated Universe has a pretty solid track record (if you omit Green Lantern: First Flight).  The people in charge are usually able to take the source material to heart and produce some really good animated movies.  For the most part, all of the flicks in the DCU Animated line have been taken from great runs on their respective comics (Superman/Batman: Public Enemies, Superman/Batman: Apocalypse, and The Dark Knight Returns) and rarely does the animated feature improve on the source material.  Flashpoint Paradox is the exception to the trend.

Justice League: The Flashpoint Paradox is based on a five issue mini series by Geoff Johns and Andy Kubert.  The series was the last story told in the DC Universe before the New 52 reboot.  The story told a tale where The Flash (Barry Allen) went back in time to save his mother from being murdered, and in doing so Barry changed the entire current time stream (a kind of butterfly effect).  Superman, Batman, Wonder Woman are all still there, but there have been some drastic changes to all of them.  If you haven’t read Flashpoint, there are some twists you might find pretty interesting.

This is the second DCU feature that is not produced by Bruce Timm (Batman: The Animated Series). Since his departure, the folks in charged stated that from now on, they will not do direct adaptions of the source material.  Rather, they will draw inspiration from the original comics, but do an exact animated version of the stories.  Flashpoint Paradox is no exception.  They have kept a lot of the plot points and action sequences from the book, but they have omitted some of the main characters, and added different ones in their place (they add Aqualad from Young Justice).  They also make some changes to this world’s version of Superman.  If you thought people were pissed about the way Superman acted in Man of Steel, be ready for some serious backlash after they see this version. Also, there are two versions of Batman in the movie.  One being Bruce Wayne, but the other is not.  Again, if you haven’t read the story already, it’s a great twist when they reveal who he is. 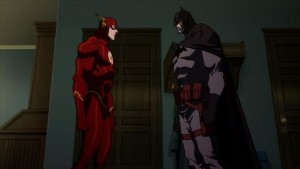 The movie centers around it’s action scenes, and that’s where it loses a little something (I’ll get into that in a bit).  There is a massive war being fought by Aquman’s army against Wonder Woman’s Amazons.  As the battle between the two rages on, we get to see the involvement of Captain Marvel (Shazam or as he’s referred to in the story Captain Thunder), Grifter, and Clayface even makes an showing.  They also do a great job capturing just how fast The Flash really is. It was really cool to see him run in between bullets and be able to see how fast he could deliver punches (there’s a scene with a fight between The Flash and Aquaman that was great.)

The movie is rated PG-13 and it’s a HARD PG-13.  There’s more blood and lost limbs (a certain strange visitor from another planet takes off someone’s arm) than I expected.  If you were hoping to watch this with a younger person, I would advise against it.  As far as the rest of the audience, I think the violence is fine.  The ending battle is about as hard hitting as you can get and a lot of fun to watch.

Where the movie is lacking is in the emotional department.  In the original source material, the story centers around Barry Allen and the loss of his mother.  The writers of the movie are so wrapped up in the action part of the film that they forget to give a little emotion at times.  They do give us a scene where Barry wakes up in the alternate timeline and sees that his mom is alive.  It felt rushed and didn’t resonate the same way it did in the books. Also, in issue 5 of the comic, it’s revealed that because Barry saved his mom from being murdered, he is the reason for this timeline. As the war rages on between Aquaman and Wonder Woman, The Flash is faced with a decision.  Does he let this world end or does he stop the past version of himself from saving his mother’s life?  In the issue itself, Barry has a heart felt talk with his mom about what he must do.  It’s a pretty emotional sequence that I feel like would make Barry’s decision that much harder.  I realize they can’t include everything but that scene would have a really nice touch.  They did however keep the ending where The Flash is back in the current time and is able to give Batman something that The Flash was given by someone in the screwed up timeline.  It’s a very powerful scene and I’m glad they kept it in.

The end of the movie gives a glimpse into what the future might hold for the DC Animated Universe.  With everything back to normal, Barry goes to see Batman in the Batcave.  It’s here that The Flash and Batman both are wearing the costumes from the current New 52 Universe. It was announced that the next movie will be titled Justice League: War. It will be based on Geoff Johns and Jim Lee’s Justice League book which is also set in the New 52. Does that mean all of the upcoming movies will be set in the New 52?  I don’t think so.  Along with Justice League: War, DC also announced that they will release Son of the Batman (based on Grant Morrison’s initial run on Batman and introduces Damien Wayne) and a Batman: Assault on Arkham (based on the Rocksteady video games). 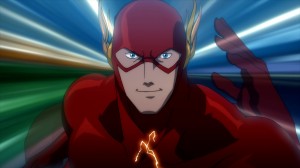 Is the most recent addition to the DCU Animated features worth your time? Absolutely.  It misses the mark with some of the emotional beats, but overall I’d say the movie is in my top 5 favorite so far.  The voice acting is great, the action sequences are a lot of fun, and it’s a well told story.  If you’re a Flash fan and you’ve been waiting for the Scarlet Speedster to get his own movie, this should tide you over until they finally make the announcement for the live action movie (maybe).  If you aren’t familiar with the character go pick up this up along with Flash: Rebirth (the comic that re-introduces Barry Allen to the DC Universe).  It’s by Geoff Johns and has amazing art by Ethan Van Sciver.