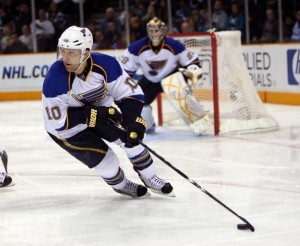 So, is the season over? Not by a long shot! The Blues have proven over the last two years that the last half of the season is when they tend to shine. It is almost as if this team revels in being the underdog. Pair that with the fact that the Western Conference is still very tight. With at least a game on hand to every team in the West, and 4th place being only 10 points out, a turnaround is a real possibility. To be almost a sure thing the Blues will have to a good 2/3 of their remaining games to have a solid shot of making the playoffs.

Tonight could be a major turning point, coming off the injured reserve from another concussion is proven playmaker and scorer Andy McDonald.  The forward was really starting to heat up until a collision with a knee at the end of an unfortunate overtime loss to the Edmonton Oilers on December 4, 2010.  McDonald will be forced to face the same team he encountered right before his injury, a team that is struggling more than the Blues are currently.

The bad news is that despite gaining one player back from injury, the Blues have now lost another to injury. Starting goaltender Jaroslav Halak has been injured, and is listed day-to-day with an upper body injury. The Blues organization has called up Peoria’s (and St. Louis native) Ben Bishop.  Starting in net tonight will be backup goalie Ty Conklin who has had a troubling season so far.

Keys to the Game:

It may sound cliche at this point, but this is a must win game for the Blues. The team is well rested, and has seen the return of a few key players. A game like this might determine if the Blues are going to be buyers or sellers at the trade deadline at the end of the month.

Let us know your predictions for the game below!